On Monday morning, we finally managed to drag ourselves away from Les Gets and took the picturesque Route Des Grandes Alpes down to Cluses to stock-up on food, drink, LPG and diesel. Chores done, we drove the short distance up to Sixt-Fer-à-Cheval in The Grand Massif. One of France’s official prettiest villages, Sixt-Fer-à-Cheval certainly warrants this award and The Commune have provided a free motorhome aire just a short walk from the village centre and right on the banks of the river. Naturally, at this time of year, the place was pretty much full and we just about managed to get Sebo into one of the few remaining places before walking into the village to check-out the handful of market stalls which we’d spotted on the drive through earlier. Fortunately (for us!) we’d already stocked-up in Lidl so we didn’t need to buy anything – just as well since this was the local artisan market and prices were humungous. I don’t doubt the food was top quality but €18 for a cooked chicken is a tad too much for our pockets at the moment. 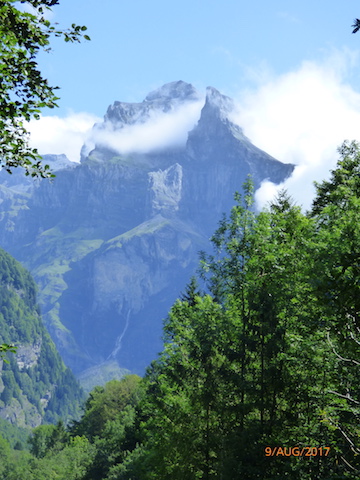 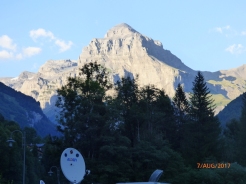 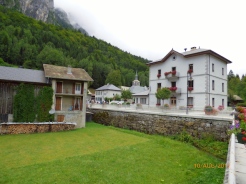 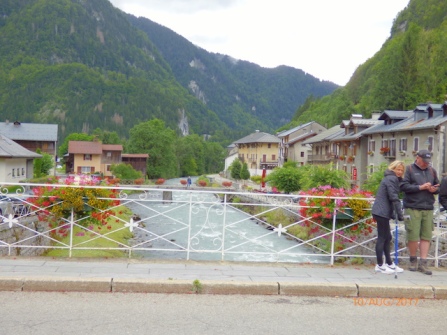 With the sun out, we bbqd dinner and were just sitting out, admiring the views, when the rain came from nowhere. In we scuttled, waiting for it to stop – it didn’t, for a whole 24 hours!! Tuesday was a complete wash-out as we sat in Sebo for the entire day, only venturing outside when Harley needed to be emptied! The forecast had been for an occasional shower and thunderstorm in the morning – how wrong was that??? The thunder started in the early hours of Tuesday morning and continued until well into the afternoon. When the rain finally stopped and we could get outside, we couldn’t believe the rise in the river level – what had been little more than a stream meandering gently through the village had become a raging torrent hurtling downstream at a rate of knots! Still, the Rafting guys and gals were loving it, judging by the squeals of joy we could hear as crowds of them launched their rafts from our car park.

With the sun out, we set-off to walk to Fer-à-Cheval Cirque , some 6.5km from our sleepy spot. A horseshoe-shaped natural amphitheatre of 2000m high cliffs from which thirty waterfalls spurt – normally best seen in June when the snow is melting but, following heavy downpours recently, the cascades are in full flow at the moment so well worth the walk out there. Unfortunately, by the time we got there, clouds had drifted up the valley and were now obscuring the tops of the mountains but we managed to see at least some of the thirty cascades. We couldn’t do too much in the way of walking actually inside the cirque itself as the whole area is a nature reserve and dogs are only allowed into a small bit of it. 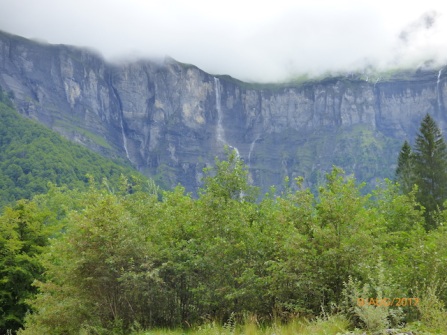 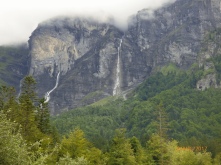 On Thursday we walked-up to The Cascade du Rouget – it was absolutely spectacular! On the walk back down, we spotted the Piste de Cascades – a blue piste which runs all the way down from Flaine to Sixt, 14km in length and with a descent of some 1700m, it’s renowned for being one of the most picturesque runs in the area. The last time I skied was in Flaine a few years ago and we’d been looking forward to doing the Cascade run – unfortunately, it being early January, and with Sixt being so low, the run wasn’t open due to lack of snow!

By this stage, the weather has improved quite dramatically and the forecast is pretty good for the foreseeable future. On Friday, we decamped and drove the uber-short distance (7km!) to Samoëns, another resort in the Grand Massif Area, much bigger than Sixt but with an attractive old village centre and, again, free parking for motorhomes just a five minute walk from the centre. The place was buzzing with holidaymakers – lots of French families and a fair few British voices were heard as we took an evening stroll around town. Lots of development going on too! Here’s hoping they don’t spoil it! 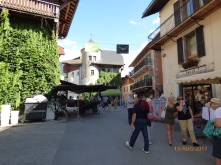 On Saturday morning we awoke to blue skies and blazing sunshine so we opted to walk along the river to Morillon – an easy “no-hills” meander – and treated ourselves to lunch in a restaurant. Very tasty it was too, apart from the swarms of wasps which seemed to have taken up residence on the terrace, resulting in us looking like semaphore operators as we battled to keep them out of our food and drinks without getting stung! As we walked back down to the lake, I spotted a banner advertising a free concert with Les Choucas- the band who’d played at the 4×4 Trials in Les Gets and who we’d listened to from under Sebo’s awning but not actually seen – and fireworks over the lake on Monday night. Sounds good to us, count us in!

On Sunday, Samoëns were holding their Mountain Guides Festival so we mosied into town to see what it was all about. We arrived to find a “Blessing of the Guides and their equipment” ceremony in full swing , after which, all the local Guides were introduced to the crowd and the local mayor said a few words before announcing that there would be various workshops and demonstrations starting at 2pm in the village square. We took ourselves off for a walk up the river and through the wooded hillside for a couple of hours then headed back into town to see what it was all about. They’d set up a climbing wall, a slack line and various other bits of climbing stuff for the kids to try – all very well done and, presumably, it would drum-up a bit of business for their climbing school.

On Monday, we headed for Morillon, but not before driving back down to Cluses to do a Lidl shop – Tuesday is a Public Holiday (Feast of The Assumption) and a quick check on the Lidl App had revealed that they were closed all day (unlike every other supermarket which appeared to be open at least until lunchtime!). We parked-up on the huge telecabine car park in Morillon – another free spot with an awesome view. By this stage, the sun was beating down and our weather station on Sebo’s roof was showing 41C! Needless to say, there wasn’t much walking done by any of us. We lounged in the sun and Harley made straight for his shady spot underneath Sebo where he slept the afternoon away, only venturing out once it got cooler! 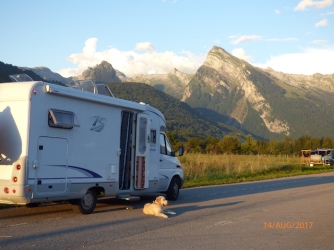 We walked down to the event site when we heard the music starting-up -the place was jammed and it was good to see that it wasn’t just full of tourists – at one point, the vocalist asked for a show of hands from the holidaymakers and another one from the locals – we reckoned a good 2/3s of the crowd were locals. As darkness fell, the band stopped playing whilst the firework display took place. Absolutely fantastic display which seemed to go on for ages! The band struck up once again and played until just after midnight – I reckon they would’ve carried on and on and on but for the fact they knew they’d be in trouble if they did due to noise restrictions for the local residents. Fair enough! Anyway, they were a great band, playing everything from Highway To Hell to Disco Inferno with a smattering of French songs thrown in for good measure. A good night was had by one and all!

Next up for Team Sebo is Mont Blanc – nope, we’re not actually climbing it! Roy’s already done that! We’re going to head towards Chamonix via a rather picturesque Aire at Plassy Plaine Joux which has awesome views of Mont Blanc – so be prepared for lots of Mont Blanc photos in our next post……

One thought on “A Week Of Meandering In The Grand Massif – Sixt-Fer-à-Cheval, Samoëns And Morillon.”