After our week of Grand Massif meanderings, on Tuesday morning last week ,we finally headed for pastures new, in the shape of Passy-Plaine-Joux – a small ski resort, popular in the summer with hikers, bikers and parapenters due to it’s absolutely awesome location! Half way up a mountainside, at 1360m, the resort has had the foresight to provide camping facilities – three different areas for camper vans and tents, some with electricity, some not, and at a very reasonable price (€9/24 hours, €1 extra gets you the code for the toilets and showers and a further €1.50 gives you 24 hours of 16A electricity) considering the view of the entire Mont Blanc range across the valley, this was uber-good value in our book, particularly since the blasted fridge has thrown it’s toys out of the pram yet again and is refusing to work on gas so we need a decent electrical supply for a couple of days to keep the freezer contents frozen and, possibly more importantly, our beer cold! We’ve now named it Moriarty since it’s our “nemesis”! On Wednesday evening, we got fab views of L’Aiguille du Midi, Le Refuge du Goûter (the last stop before the final climb to the Mont Blanc summit for those intrepid climbers choosing this route – as did Roy when he succeeded in doing exactly that back in 2003) and, of course, the top of Mont Blanc itself! Absolutely breathtaking! 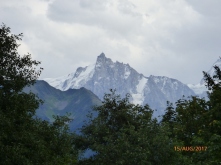 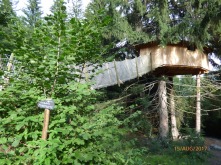 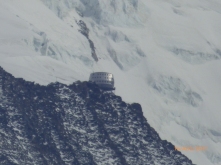 It was a great spot to spend a couple of days and nights and we took ourselves off on a couple of decent walks to make the most of the numerous walking trails on offer. Unfortunately, the one we’d set-out on on Wednesday morning involved venturing into the Nature Reserve and, with Harley in tow, we had to change our plan (no dogs allowed!) so, instead of reaching a mountain hut several hundred metres above us, we had to make do with the beginning of the gorge several hundred metres below us before looping back around to our sleepy spot. Not an overly long walk by our standards but tricky enough in view of the steep, narrow and very slippery path we ended up on. The path less travelled, possibly, although, to our amazement, we saw a young nun, in full habit, striding up the path, one hand clutching her Rosary Beads and the other hitching up her full length habit so as not to trip over! Not a sight you see every day!

Having maxed-out our 48 hours-worth of electricity, and with a fridge full of cold beer, we left our picturesque sleepy spot on Thursday evening, and headed down to Les Houches for the night – the lakeside car park is available to motorhomes for a max of 24 hours in the summer and, since it’s free and fairly quiet, we thought we’d avail of the opportunity before hitting Chamonix on Friday. Again, the views of Mont Blanc etc were absolutely stunning and it all seemed close enough to touch as the sun began to set and cast the most amazing light on the whole range. 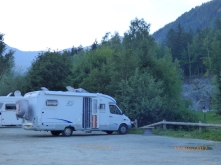 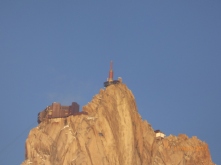 We awoke on Friday morning to rising temperatures and, as we arrived in Chamonix late morning, it was bakingly hot! Thankfully, we found a nice wee shady parking spot under some trees on the roadside so at least Sebo was kept in someway cool. We, on the other hand, headed off into town to explore. Roy has been here before, a couple of times, whereas I have never really been that interested, being under the impression that it would be quite pretentious and hellish expensive – seems I was wrong on both counts (though, maybe it’s both of those things in the winter?). Anyhow we had a mooch around the old town and then, having taken a peek at some of the restaurant menus, decided that we could, actually, afford to eat lunch out here after all. A rather nice three course menu was served to us for €15.90 each – the portions were far bigger than we expected for the money- a huge plate of jambon cru for starters, decent sized and perfectly cooked (we asked for “bleu” and “bleu” we got!) faux filet and frites for our main and massive desserts of chocolate mousse (for me) and creme caramel (for Himself), all washed down with a pint of Heineken, a demi-pichet of rose, a bottle of water and a cappuccino – total bill? €55! No complaints there…..AND no dinner to be cooked later! Result! 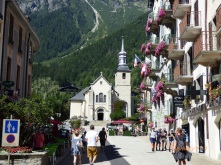 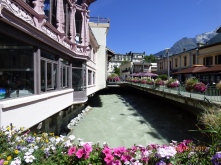 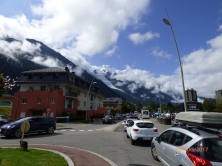 Whilst our Chamonix parking spot was both free and nicely shaded, it was also alongside a busy main road so not a goer as a sleepy spot and we didn’t fancy paying out €15 to stay on the overcrowded Park & Ride car park with it’s designated motorhome parking so we drove the few kms up the valley to Argentière, where we parked up on the car park at the bottom of the glacier, alongside a small church and cemetery – a walk through the latter revealed an enormous number of those lying there had perished on the mountain -sad tales recounted on their headstones, memorials to mountain guides who had also lost their lives in the course of their work and many members of one family all met the same end, although at different times! It was quite touching, and a reminder of just how dangerous the mountains can be, no matter how skilled a mountaineer you are! We took a walk down into the village in the evening and, as we walked back up to our intended sleepy spot, the thunder rumbled and rain started to fall. We opted to move down to the more sheltered car park at the Grands Montets Telepherique as we were a tad exposed on the elevated car park by the church. Just as well we DID move as the thunder and lightening roared around the valley for several hours and the rain was torrential! Nonetheless, we managed a decent night’s kip and, thankfully, when we awoke on Saturday morning, the rain had stopped and the sun was doing it’s best to burn away the clouds which now obscured the glacier.

Our plan for the coming week is to mosey on further down the Route Des Grandes Alpes through Saint- Gervais-Les-Bains and Megève then head up the Col Des Aravis for a night or two, maybe with a night in La Clusaz, before taking a few more mountain drives in a pretty much southerly direction, maybe as far as Barcelonnette before starting to make our way back over west. Now, having said all of that, it’s all depending on this flippin’ fridge and whether we can either get it sorted ourselves OR find a Dometic engineer locally who’s actually back from his annual month’s holiday! Watch this space……

2 thoughts on “The Awesome Wonders Of The Mont Blanc Range From Several Different Angles!”