After all the heavy-duty mountain pass driving over the last few weeks, Team Sebo decided to give Sebo (and his driver!) a well-earned rest once we got back into France. The drive down from Gstaad was pleasant enough and, as we reached Lake Leman, the countryside became much more French-looking. The chateau at Aigle was a typical French build, as opposed to the Germanic schlosses we’d seen in Switzerland, and the acres of vines growing on the hillsides were a welcome sight. As we drove into a small town on the southern shores of Lake Leman, St Gingolph, we suddenly realised that we’d crossed the border! No border controls as such, just a small kiosk in the middle of the main street, with a lone gendarme observing traffic – no customs checks, no passports required! Happy days! We gave a collective cheer as we saw the French flags flying! Back to just about THE most motorhome friendly country we’ve visited so far!

After a short lunch stop just outside Evian-Les-Bains, we picked-up the Route-Des-Grandes-Alpes, and headed for Les Gets – a town I know particularly well having spent many a week in January skiing (and falling) down it’s many and varied pistes. The Commune here have, kindly, provided motorhome parking for around 20 vans on a dedicated part of a ski-lift car park. Excellent – even more excellent that it’s actually FREE during the summer months and one can park for a maximum of seven days! Perfect! Team Sebo were in heaven at the thought – a perfect place to park Sebo up for a rest. The place was pretty busy when we arrived and we just about managed to slot into the last available space that gave us room to put our awning out and laze in our chairs – something we did far more than we intended as it turned-out as the temperatures rose, making it too hot for any serious hillwalking (well, that’s our excuse for being so lazy, and we’re sticking to it!).

Les Gets is a pretty town -full of Alpine chalets and the like and though I’ve watched it grow over the years, thankfully it hasn’t been allowed to be over-developed with ugly high rise apartment blocks etc. The Commune has been pretty good at investing in the infrastructure as the town has grown and it’s become not only a popular ski resort in the winter, but a hugely popular mountain biking centre in the summer months. In short, the place was buzzing – a far cry from most of the other ski resorts we’ve been to lately, most of which were pretty much closed until the snow falls next winter!

We took ourselves off up the mountain on Monday afternoon then slaked our thirsts at a local bar in town on the way back – at €5 a pint, it was about the cheapest in town so, needless to say, it became our “local” for the duration. On Tuesday, we packed a picnic and set-off to walk up Mont Chery – by the time we reached the top of the telecabine (yes, we walked up rather than getting the cable car!), we were roasting! The heat and humidity made walking uphill a nightmare (especially for me!) so, after demolishing the contents of our sandwich bags, we decided to do the circuit around the mountain, rather than over the top – at least that way we were in the shade of the trees rather than being subjected to the sun out on the summit. It was a fab walk, giving us awesome views over The Mont Blanc range (unfortunately, Mont Blanc was still wearing his hat but we could just about make him out in the far distance!) from Mont Caly. Harley was loving the freedom of running ahead of us through the woods – until he stood on an electric fence lying on the ground! Poor fella – we’d never heard him yelp like that before! I actually thought he’d been bitten by a snake – until he ran back down to us and over the same piece of wire! More yelps! He then tried to persuade Roy to carry him, for fear of doing it again! God love him! Thankfully, there was no sign of burnt paw pads so he was deemed fit to continue though he stuck beside us after that!

Unfortunately, just as we left the forest and hit the road back down to our sleepy spot, the thunder started rumbling, followed soon after by a torrential downpour. How quickly the weather changes in the mountains. Luckily, we’d had the foresight to pack waterproofs into the rucksack and, as we were donning them, whilst sheltering under the balcony of a farm building on the roadside, a nice French lady stopped her car and asked if she could give one of us a lift to pick up our car! Thoughtful of her, eh? We thanked her profusely but declined the offer, preferring to hang on until the rain subsided rather than having to start decamping from our pitch and risk losing it in the meantime.

Fortunately, the downpour didn’t last for too long and as soon as it eased-off, we headed back down to town to pick up a few supplies and have our usual pre-dinner beer. Just as we finished our drink and left the bar, the rain came again and we ended up sheltering under the veranda of a house on the main street, praying for it to stop! At this point, a woman ventured out of the house, saw the rain AND us (with our VERY wet dog!), asked us where we were staying and offered to put us all in her van and give us a lift. Naturally, we declined her kind offer (on account of the fact that her van would probably smell of wet dog for weeks to come!) but we did appreciate her kindness.

On Wednesday, the sun was back with a vengeance and our fridge (work of Satan that it is!) threw it’s toys out of the pram yet again! We’re hoping it’s just a bad fill of gas somewhere along the line that’s maybe dirtied the jet or maybe it just decided it was being overworked and needed a rest. Who knows? We certainly don’t, since we’ve dismantled what we could, cleaned-it all and put it all back together and, since it’s now working intermittently, we’ll just hope we can manage with it until we get home since it would appear that pretty much every motorhome dealer/repairer in the region is closed for annual holidays until the end of August! We were invited up to Chalet Tressud by my old friends, Jo and Peter for a BBQ on Wednesday evening – it was good to catch up with them both after so many years and Harley was delighted to have a bit of doggy company, in the form of their two flat-coated retrievers, Marmite (13 – I remember him as a pup!) and Olive (4 months old and as cute as a button). A great night was had by one and all so thanks a mill, Jo and Peter for sharing your precious Lincolnshire sausages with us- they were yummy! 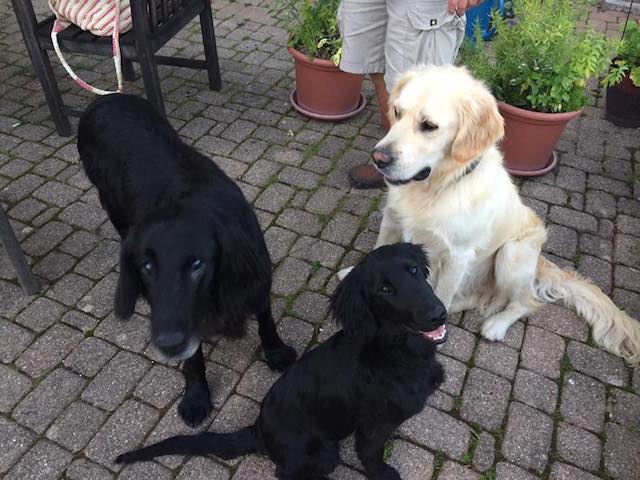 It turned-out that the coming weekend was the Annual Club 4×4 Trials which were being held on the slopes right where we were parked! A free event, which promised to be a bit of fun even for those of us with no real interest in 4×4 driving i.e me! We watched with interest as the courses were built, marquees set-up and crowds of drivers pitched-up with their vehicles, caravans, roof-mounted tents etc. By Saturday morning, the place was thronged! We wandered up to watch the trials and, I have to say, I was immediately taken by the whole thing. Health and Safety seemed not to be an issue – no event staff shepherding folk around or closing off walkways whilst vehicles moved from one section to another rather everyone just took responsibility for their own actions and, hey, whaddya know, it worked! The bars were open from very early in the morning til late at night and folk were wandering around with litre pitchers of beer pretty much all day yet we saw no trouble, no drunken behaviour, other than a bit of a sing-song after the band had finished playing on Saturday night. We just couldn’t help but compare it to back home – how different societies are! 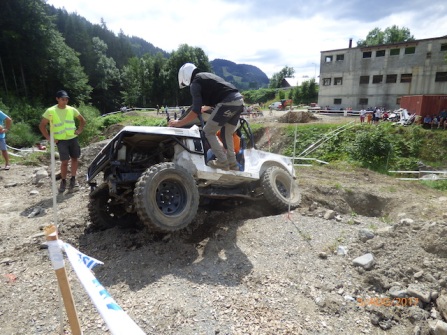 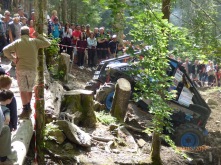 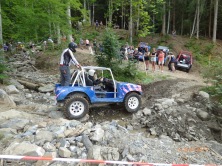 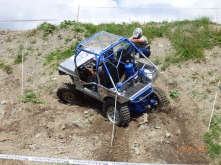 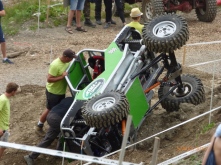 On Saturday morning, as Roy took a walk across to the event site, he found €20 note lying on the ground – there was no-one around so he picked it up (as you do) and came back with a huge grin on his face. As we sat drinking our morning coffee, we pondered on what we could spend it on and both came to the conclusion that, since we

hadn’t bought steak in months (on account of the astronomical price of it pretty much anywhere!), we’d treat ourselves to a couple of pieces from the local butcher for dinner. So it was that we feasted on THE most tender (and rather large) pieces of faux-filet, bbqd to perfection by The BBQ King – so, to whoever lost €20 “Thank you, but be more careful with your dosh next time!”

Sunday was spent watching the 4×4 Trials again – then watching the orderly fashion in which they all packed-up and left after it was all over. By Monday morning, it was as if it had never happened! Even the diggers had pretty much finished removing the obstacles and filling in the holes – the sledging slopes of Les Perrieres were smooth once again! Our “holiday” in Les Gets had come to an end and it was time to hit the road once again. Next stop? Cluses for LPG, diesel and a Lidl shop then onto Sixt Fer A Cheval for, hopefully, a bit more walking and a little less lounging around eating “sticky buns” at the local patisserie (another habit we’d developed in Les Gets!)

2 thoughts on “Lazing In Les Gets, Haute Savoie, For A Whole Week!”