As we drove into Switzerland from Liechtenstein. we could understand how the Swiss Army lads had inadvertently crossed the border – errrr, there is no clearly marked border on the back road! Just a couple of narrow arches signified we’d left one country and entered another and the presence of a rather large Swiss Army barracks on The Swiss side. 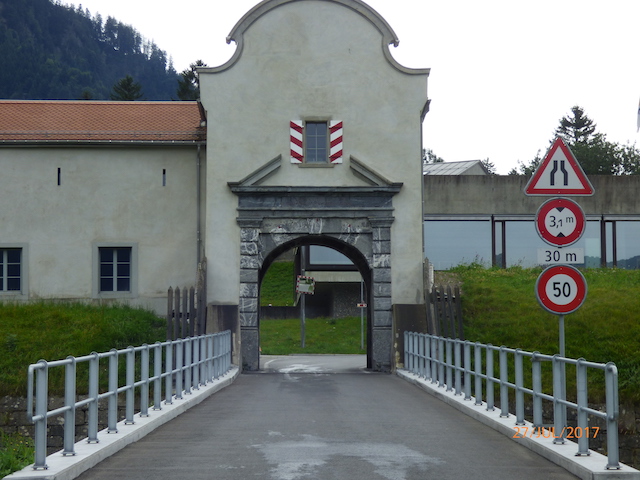 As we headed down through the Swiss countryside and villages, we were both a little disappointed – the villages were drab and uninteresting and the larger towns, like Chur (Switzerland’s oldest town) were a mish mash of modern tower blocks and huge industrial estates. Maybe we’d been spoiled rotten by the pristine villages with their flower-filled window boxes hanging from every balcony. We pressed on and finally landed in Felsberg, where our Park4Night App assured us we could park up overnight in a couple of car parks alongside The Rhine, without any bother. We located the first spot – no parking restrictions were in force so we had a spot of lunch and then went for a stroll along the river – Harley got his first swim in a while so he was delighted. As we walked, we happened upon various walking routes signposted – but some were closed. Turns out this is yet another military area and, in this case, is an active firing range, hence the timetable for the trail closures! Hmmm, for a nation who are allegedly “neutral”, they seem to have a huge military force! We had, by this stage, located the second Park4Night recommendation – further out from town but closer to the military installation so we decided to stay put for the night.

We barbecued our dinner and were just congratulating ourselves on finding a nice quiet sleepy spot for the night when our euphoria was cruelly shattered by the arrival of two what appeared to be security chaps who informed us we couldn’t stay there and would have to go to the camper park in Chur for the night. Needless to say, we were pretty miffed since we were well out of the way, not bothering anyone (there were no houses around!) and the camper park in Chur had already been discounted on the grounds that it was in an industrial park alongside the motorway and was hellishly overpriced! However, since we weren’t about to embark on a whole debate with these two guys (whoever they actually were, we never discovered!), we packed-up and shipped out, around the corner to the other spot we’d located, only to find that the English/Irish couple parked up there in their van had also been told to shift by the same two guys! By this stage we were even more miffed as we drove down to Bonaduz, 9km down the road, and slipped into the Sports Stadium car park -or at least into a small part of it, the rest having been commandeered by the military for parking their vehicles and was, thus, unavailable to the public. We pulled our blinds, locked ourselves in and agreed that, should there be a knock on the door, we’d pretend there was no-one home!

Needless to say, the previous evening’s events had left a bit of a sour taste in Team Sebo’s mouths with regards to Switzerland but, as ever, we tried to keep our chins up and headed for The Oberalppass to Andermatt. An absolutely amazing alpine road with stunning scenery and, as we reached the top, and The Oberalpsee (lake), we spotted a few motorhomes parked up on a piece of what appeared to be waste ground so we made a beeline for it! As we pulled-in, we were waved down by a little old man wearing what looked like a forest ranger jacket – at first, I thought he was telling us we couldn’t park OR that he wanted money for parking but, as he babbled on in the strange German dialect they speak in this region, it became apparent that we could park there for as long as we liked, overnighting was no problem and, best of all, there was no charge! I could’ve hugged the wee crittur! Finding a flat spot was a tad difficult, amongst the potholes and all but we managed it in the end and there we were, parked up with THE finest view of the lake, with it’s mountainous backdrop and, whilst we were marvelling at the view and eating lunch, we watched as The Glacier Express wound it’s way into Oberalppass station -now THAT would be an awesome train journey but will remain on The Bucket List for a while yet, unfortunately. 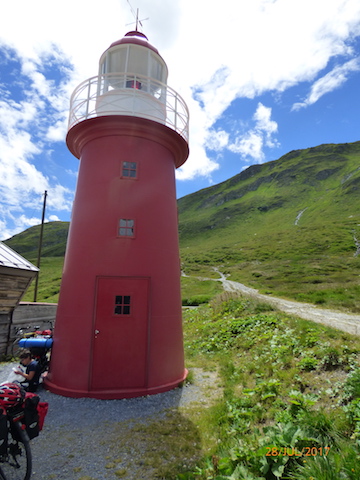 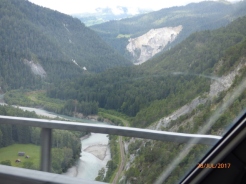 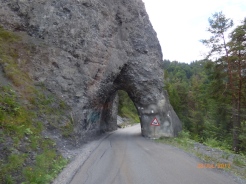 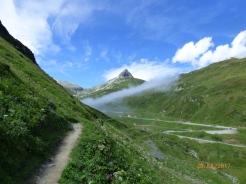 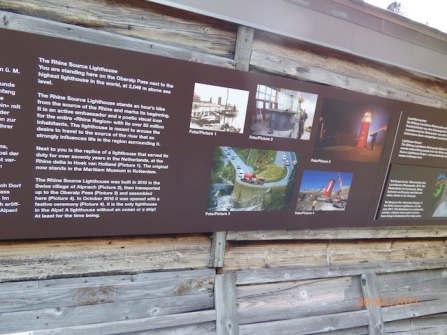 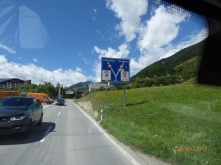 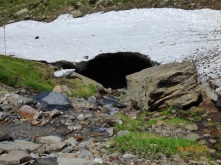 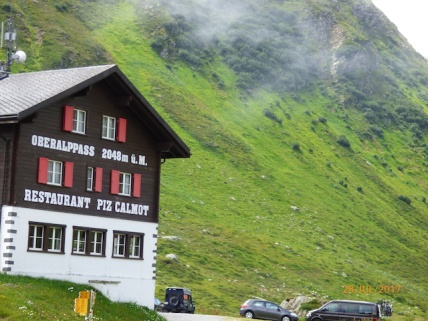 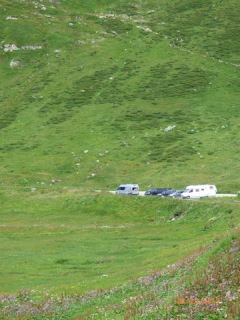 We took a walk up towards the source of The Rhine – it’s supposed to be a 3km schlepp uphill from The Lighthouse (yup, a Dutch lighthouse – the only one in The Alps, apparently – not surprising, really, but it signifies the source of The Rhine which goes out into The North Sea in Holland so I suppose it does make some kinda sense if you think about it that way!). Anyhow, we schlepped, uphill, in the searing heat, for far more than 3km before deciding to turn back and let Harley have a play in the rather large patch of remaining snow lying on the hillside. He was beside himself – running and rolling in snow are two of his favourite pastimes!

As darkness began to descend upon us, so did the cloud cover – so much so that for a period of time, we were totally engulfed and couldn’t even see the lake just 50m in front of us! Next minute, our peace was shattered as a Swiss family rolled-up in a huge caravan and people carrier and reversed into a space next to us – so close that we could barely open our doors! Quite why remains a mystery since there was ample parking further down which would have given them (and us!) far more room PLUS we wouldn’t have lost our view! To add insult to injury, their three small kids were up and about screaming and shouting from 7.30am the next morning. Uggggh!

Interestingly, there’s a whole heap of disused military buildings up here – further Google research revealed that the Swiss Military have spent a huge wedge of dosh on hollowing out mountains and building mega-tunnels which can be sealed in the event of a nuclear attack! Rumour has it that there would, in effect, be room in these bunkers for pretty much every Swiss resident! Quite how long they would have to be locked-up in these bunkers following such an attack seems to be unknown. Again, for a “neutral” country, they seem to be fairly paranoid regarding being attacked!

We shipped out early enough the next day, skirted Andermatt (which didn’t look all that special either, to be honest) and drove up the Susten Pass, heading for Meiringen. Another absolutely spectacular drive but absolutely chock-a- block with motorbikes and sports cars. The views were awesome though and it pretty much made up for the Grossglocknerstrasse disappointment a few weeks ago in Austria. We stopped at the top and had our lunch whilst watching the large groups of bikers of all nationalities having a ball up and down the hairpins! 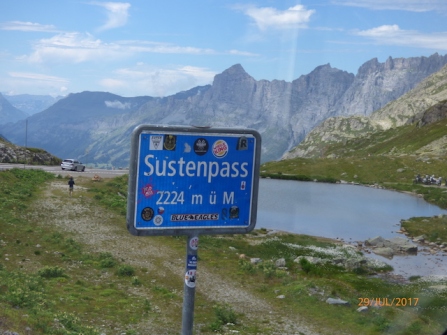 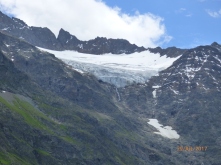 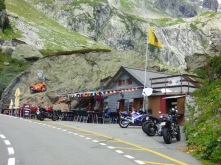 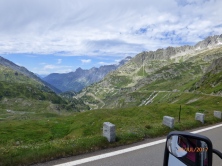 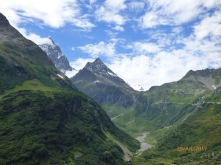 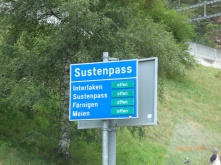 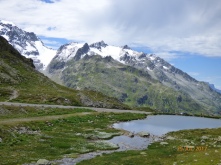 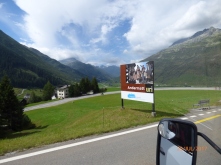 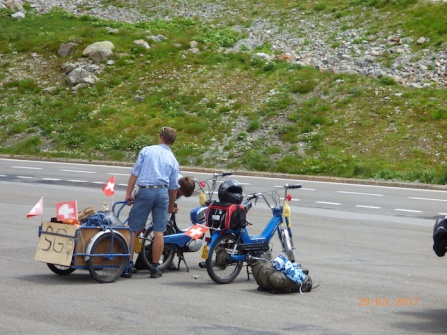 What goes up must come back down again and we did, with style! An all round amazing drive to Meiringen – famous for it’s Reichenbach Falls where Sherlock Holmes finally polished-off his nemesis, Prof Moriarty! It has to be said, Meiringen certainly make the most of this particular “claim to fame” along with it, allegedly, being the origin of the “meringue”. In fact, they combine the two and offer “Sherlock Holmes Meringues” – tiny meringue nests with a picture of Sherlock in the middle, at hugely over-inflated prices, in every other shop in the town. As a town, it’s hugely tourist-driven and full of tat shops. We parked-up in one of the few car parks allowing us to park during the day (at a price, obviously!) but, as per usual, “no overnight motorhome parking” signs were everywhere. We took a stroll around the town then headed over to The Reichenbach Falls. We had Harley with us so we couldn’t avail of the Reichenbach Funicular up to the falls themselves as dogs are about as unwelcome as motorhomes here and, since it was hitting 30C and the sun was blazing, we couldn’t be bothered walking up – we just took a few photos, returned to Sebo and hit the road towards Interlaken where we hoped to find a “hole in the hedge” for the night.

To be honest, our hopes weren’t high on the prospect and, as we drove, we discussed our proposed Jungfrau train journey. Recent research had informed us that the cheapest we could possibly do this particular “Bucket List” item was to buy a “Good Morning” ticket, which allowed us to get the 0635 train from Interlaken and returning on the 1313 from the Jungfraujochbahn – a five hour round trip which wouldn’t really give us enough time at the Top PLUS would mean leaving Harley in Sebo for much longer than we’d like. All that, along with the high cost (just over a hundred quid EACH!!!) made us, somewhat reluctantly, knock the idea on the head for now. Maybe we’ll do it at some stage before we do actually kick the bucket but, for now, it’s still on The List!

As we got to Interlaken, we soon realised that we hadn’t a hope in hell of parking anywhere for the night – every single car park we drove past banned overnight parking (and, indeed, many banned motorhomes day AND night!), the place was absolutely jammed with tourists and the campsites were bunged to the doors. We weren’t surprised, to be honest. since this was the Saturday before Swiss National Day, Aug 1st so, technically, a Bank Holiday weekend. Team talk ensued and we decided we’d both seen enough of Switzerland and we’d just drive to France instead – much more motorhome friendly and a helluva lot more affordable than Switzerland!

As it turned-out, and with our bellies crying out for food, we happened to drive through Gstaad and spotted a football stadium that allowed us to park overnight. Well, I say “allowed”, I should really say they didn’t have any sign up to say we couldn’t park up there so we pulled in, had dinner, had an earlyish night and left for Les Gets, France the next morning! Neither of us could wait to get back into France and we should, with hindsight, have maybe given Switzerland a miss in the height of the summer when a pitch on a campsite requires a second mortgage and, if we ever decide to go back, it’ll be during the period of our ACSI discount validity, either in spring or autumn. Jury’s still out on it…….

2 thoughts on “Fabulous Alpine Driving In Switzerland-But That’s About All We Liked About It!”