Yes, folk, Sebo's brakes were still the cause of sleeplessness nights for one member of Team Sebo so, on Thursday morning, we headed for the local Peugeot/Citroen workshop (like you do, when you're desperately trying to avoid a Mercedes Benz bill) in Schwaz. A rather disinterested young service manager listened to our plight then merely said we needed to go to Mercedes and handed us the address of the local Merc dealership as they were "too busy" to even look, let alone fix the problem. Mmmm, that's the second workshop that have said this…. So, it was a reluctant but, by this stage, desperate, Team Sebo that arrived at the rather plush Mercedes dealership just down the road. Sebo was taken immediately into the workshop, jacked up and instantly diagnosed with having a pretty serious condition – absolutely no back brakes whatsoever! As if this wasn't bad enough, we noticed a rather large pool of oil sitting on the forecourt, exactly where Sebo had been parked on arrival! Further investigation revealed that "someone", who shall not be named for fear of reprisals (!) had, when topping-up the oil the previous evening, failed to replace the oil filler cap and Sebo's engine was now liberally splattered. Thank goodness we'd only driven for 5km or so! Whilst the culprit kicked himself vehemently and asked for a quote for a new set of rear brakes, a new oil filler cap, a top-up of oil and an engine clean-up, the other member of Team Sebo availed of the refreshments kindly offered by the receptionist – very nice they were too and exceptionally well-presented, in branded Mercedes Benz china and glassware. How classy is this……? 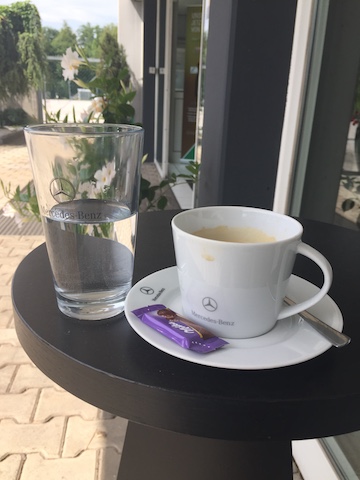 The cost of repairs was revealed-a whopping €778 (EEEEEK!!) along with the fact that they didn't have the parts in stock but they could be procured and fitted by 3pm if we were happy enough to proceed. Since we had no real choice in the matter by this stage, we agreed, smarting somewhat at the cost but relieved that it was nothing more serious and comforting ourselves with the knowledge that, since this was being done at a Mercedes Benz workshop we would at least be getting genuine parts and some kind of warranty should any problems arise.

We took Harley out for a run and then put him back in his bed to sleep off his exertions whilst we headed off to watch Leeds United get (presumably) hammered by Borussia Mönchengladbach in a pre-season friendly at Schwaz FC's stadium. As we walked down to the stadium, we could already hear Leeds fans chanting – the source was, as you would expect, a whole bunch of guys bedecked in Leeds shirts necking pints of beer outside a local bar. Oh dear! This doesn't bode well! No sign of Borussia Mönchengladbach's (who shall henceforth be referred to as T'Other Side – far less labour intensive than their full name!) fans doing the same, it has to be said! Anyhow, we get to the stadium, pays our €12 each for a ticket and in we go, via the Leeds United entrance, naturally (comes to something when they have to separate fans at a friendly match!). I have to say, I was astonished at just how many Leeds supporters were in attendance and even more astonished to find the bar open and beer was being sold for €3.50/500ml! These guys thought all their Christmases had come at once! Beer, inside the ground?? Needless to say, they made the most of it! It was interesting eavesdropping on conversations – some of these guys had flown out just for this match and were flying back after it but they spent half the match chatting to their mates rather than actually watching it! Like why??? Others were, clearly, making a week's holiday out of it and I won't even repeat the tales we overheard!

Long story short……Leeds played a blinder and the 1-1 final result really didn't reflect their dominance of the game, with several of their on-target shots either rebounding off the posts or being slightly wide or high whereas the Leeds keeper had little to do for almost 90 minutes as T'Other Side seemed more intent on playing an uber-defensive game! An enjoyable afternoon was had by one and all, despite the thunder rumbling in the distance and the short-lived shower during the second half.

Unfortunately, as we walked back to collect Sebo and Harley from the dealership, the heavens opened and two soggy excuses for human beings arrived back into the plush Reception, dripping water and leaving dirty footprints all over it's highly polished white tiled floor! With us apologising for the mess and the Receptionist apologising for the weather (!) – I should add, at this point, that she had offered us a courtesy car for the afternoon but we declined her kind offer (silly us, eh?) – we paid our dues and headed back to the same parking spot that we'd been in last night.

Quiet as it was – apart from some folk arriving at gone midnight in a van with one of those hugely irritating intercooled engines (the noise is brutal!) and feeling the need to slam doors on their arrival – for the love of God and all that is Holy, WHY????? – we slept soundly enough until just before 7am this morning when a bunch of guys arrived to repaint the white lines in the car park behind us! Needless to say, we weren't overly impressed by the noise and I'm pretty sure the residents of the surrounding apartments probably felt the same!

Our next chore was to get Harley MOT'd – his annual booster is due and I'd emailed a vet in Schwaz to make an appointment for this morning – he replied (in perfect English!) that he'd be there from 10am until 1pm today, so just call in and he'd be delighted to do the necessaries. So, we called in this morning and found the vet to be a lovely man – Harley took to him instantly and endured a full examination, with his tail wagging throughout – ears, eyes, teeth, joints, heart -had his vaccination and was given a "teethie cleanie" as a reward for being so good! He was declared "fit and healthy" and he was commended on not gaining weight since being neutered! The only member of Team Sebo NOT to have gained a few kilos since we left home, I rather suspect! As we chatted about our travels, the vet asked where we were heading next – I told him we were going up to Bad Waldsee and he recommended we take the Achensee Pass. Excellent advice as it turned out as we did just that today and had an awesome drive! We'd kinda planned on taking the road back to Innsbruck and Seefeld and then heading north but his route was so much better than doubling back on where we'd already been – we saw the beautiful lake at Achensee – 1000m above sea level and surrounded by mountains. Beautiful! As we crossed into Germany, there was no sign to say we were here – just the old customs buildings to give a clue so we never really got chance to say Aufwiedersehen, Osterreich but we WILL be back and, now that we've already done the touristy thing, we'll seek out the less-touristy places next time.

We've broken the journey to Bad Waldsee with an overnight stop in Kempten – a sizeable town which, to be honest, didn't look anything special when we hit the outskirts but a walk around the old town before dinner tonight revealed quite a pretty centre, with lots of bars and cafes around the Residenz and Rathaus Plazas but with an uber modern shopping street and mall a few steps away. We're parked-up for the night on a designated motorhome parking area close to the river – €5/24 hours parking and a service point giving 10 minutes worth of drinking water for €1. Tomorrow, we'll go to Bad Waldsee – the home of The Erwin Hymer Museum – call us geeks/anoraks whatever but we cannot wait to see all the old motorhomes and caravans!