After all the furore of the previous evening, neither of us had a particularly restful night’s sleep – more due to the traffic rumbling over the bridge beside us than from the evening’s events. Nonetheless, we arose, breakfasted and set-off for Aix-en-Provence to locate a supermarket and have a spot of lunch. Well, THAT was our plan. As we cannily avoided Marseilles on the grounds that French cities and Sebo don’t really get on too well, the traffic on the motorway skirting the city built-up, as did the tension in our cab! For the first time, we really noticed a difference in mentality as idiots tried to both overtake AND undertake on slip roads, roundabouts and, in fact, anywhere they possibly could! Madness and very stressful for both driver and navigator!! Harley took cover in his bed under the table lest he became the target of their wrath!

Things didn’t improve whilst locating the supermarket in Aix either – the same driver mentality reigned here too-and our eventual arrival at Carrefour and it’s overcrowded car park didn’t help. Finally, we managed to get parked and ventured inside. Our hearts sank! It was HUGE and badly organised-like WHO puts the beer and wine stocks at totally opposite sides of the place??? The prices were huge too! Way higher than we’d seen anywhere else in France! Long story short, we grabbed the bare essentials, jumped back into Sebo and cleared-out, not even bothering to try and negotiate their height-restricted fuel station! The car park I’d located in Aix which, apparently, has motorhome parking was rammed to the doors with cars so we grabbed a spot outside an apartment block, had a quick lunch and decided not to bother even trying to find the town centre but to head for a campsite 28km down the road which promised peace, tranquillity and some good forest walking trails to regain our sanity.

So it was that we landed at Camping Le Devancon, Peynier and were given the warmest reception we’ve ever had! Madame welcomed us with open arms, helped us choose the best, sunniest, pitch, made a fuss of Harley, told us about a forest trail down to the village to avoid walking the main road (with the caution to make sure we took the right trail else we’d end up “in the mountains”….hmmm, more on THAT one later!) and apologised for the pool not being open (errrr, it’s March, we’re using our ACSI Card to get mega-discounts, do we expect the pool to be open???).

That all happened on Wednesday – it’s now Thursday night, we’re still here and planning on not leaving until Saturday! Need I say more? We love this place! Peace and tranquillity in abundance! Just the place to spend a few days planning our foray into Italy next week.

Yesterday evening, we took a stroll before dinner. Now, we set-off for the village, following Madam’s directions, or so we thought “up the hill, turn right and follow the trail down to the village”. For those of you who’ve read our previous posts regarding our walking adventures, you know what’s coming next…..yup, we somehow missed the first right hand turn and took the second instead. On we walked, for over 3km, through some pretty stunning woodland scenery, until we finally reached civilisation – unfortunately it wasn’t the village we were aiming for! No worries, we’ll walk back to Sebo, stay another night, and find the correct village in the morning- which we did, this morning, and it was only a ten minute walk from where we’re parked-up! Doh!

The village of Peynier is exactly how I imagined a rural Provence village would be! Having read Peter Mayle’s “A Year In Provence” and “Toujours Provence” books many years ago, I had formed an image in my head of how his village would look and, although Peynier was not the village referred to in his books, it could well have been! Built on a hillside, lots of narrow streets, well-cared for village houses, a couple of bars, a shop and the essential medieval church and even more essential boulangerie. Peynier has it all, along with spectacular views of the mountains! Folk we walked passed even said “Bonjour”! We love it! 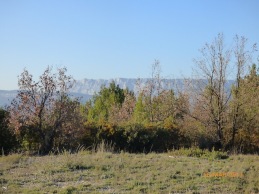 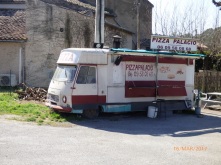 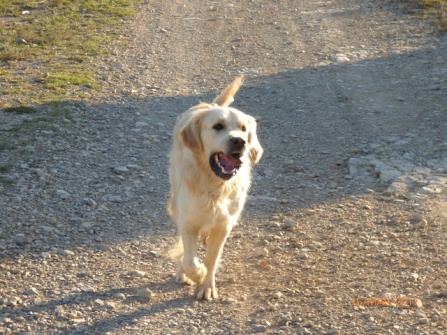 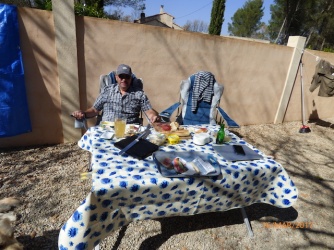 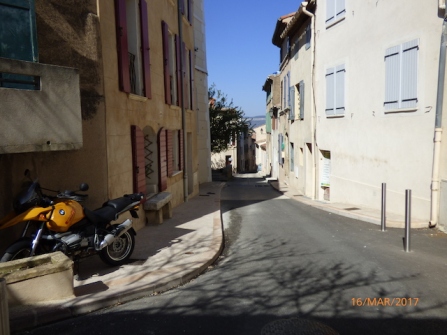 We’re planning to venture further up the mountain trails tomorrow – so if you don’t hear from us in the next few days, could you call the Rescue Services, just in case we’re “Lost In Provence” ? 🙂

Shh! You aknow the score by now! See the old motor home above?  Well that’s my retirement plan for Sebo. Karen only thinks she’s retired. What could be better, resting up, smelling good and having loads of visitors that give you money?? Pizza only, even I wouldn’t be insensitive enough to serve hotdogs with Harley in tow! Say nothing in the meantime, it’ll be a wee surprise for the Chief Bloggist in a decade….