Tuesday morning dawned and Team Sebo were ready to hit the Autostrada for Trieste. Yes, I know, Team Sebo normally avoid toll roads like the plague BUT, since Trieste was gonna be a longhaul (by our standards anyhow!), we bit the bullet, paid the tolls (€21.90 in total!) and managed to cover the 276km distance in a pretty respectable four and a half hours -allowing for a lunchbreak at a service station and two failed attempts to top-off Sebo’s refillable LPG tanks! All of a sudden, Italian gas pump attendants told us it was illegal! What??? But we’ve done it before! Oh well, we’ll be in Croatia soon enough and LPG, like most things, will almost certainly be cheaper there anyhow!

The slow lane of the eastbound A4 was bumper to bumper with foreign trucks – Slovenian, Hungarian, Polish, Slovakian etc etc-and Sebo broke his overtaking record AND his top speed for this trip! The drive took us through several wine regions, including Soave (one of my favourite non-fizzy whites!) and into Prosecco – a small village in the centre of the wine region of the same name. A pretty village, perched on the wooded hillside which just appeared to drop into The Adriatic. Our free parking space for the night was a small car park at the top of the Strada Napoleonica (you’ll need to Google Translate the Wiki page for this link as there’s no English version available!) The view was to die for – from our  sleepy spot, we had the most amazing vista over The Adriatic and three countries – Italy, Slovenia and Croatia! As night fell, the glittering lights of Venice were visible too! Trieste was pretty much directly below us and, although we hadn’t really intended spending time there, we changed our minds as soon as we saw it and, after reading Lonely Planet’s info on it, we deemed it worthy of a gander before heading out of Italy.

Up bright and early this morning- mainly due to some eejit parking up right beside us and blaring out ear-splitting bass beats before 8am (for the love of God, WHY?????), we made the most of the morning sunshine and walked one of the several well-marked woodland trails for which the area is popular with locals and long distance hikers alike. Had we been feeling uber-energetic, we could have walked the 11km round trip to Trieste itself but we weren’t (after our rude awakening) and we didn’t! We enjoyed the walk all the same and, after having lunch in our “room with a view”, we drove down and parked-up on the marina car park, just a 5 minute walk from the city centre. At 80c/hour between 8am and 8pm, with free overnight parking allowed, we decided to make this our sleepy spot for tonight. 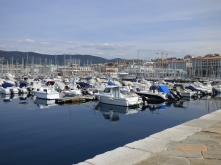 Trieste is a city with a fascinating (and turbulent) history and is a curious mix of Venetian/AustroHungarian/Slovenian/Serbian influences. In the early 20th century, it became a magnet for artists and philosophers  – including that well-known Irish literary genius, James Joyce! There’s even a bronze statue of Leopold Bloom’s creator standing on the Canal Grande and Trieste, like Dublin, and many other cities around The World, celebrates Bloomsday in the traditional fashion! We had a good wander around the sights and sat in the sunshine at a pavement cafe, sipping a genuine Italian cappuccino whilst indulging in a bit of people watching. Normally, there’s a vintage tram running from the city centre to Opicina – a 5km scenic journey which involves a funicular section. We planned to take this but, further investigation revealed that it’s currently “offline” due to a collision last August and fixing it is proving to be a problem (they can’t get the spare parts….apparently!). Pity ’bout that! 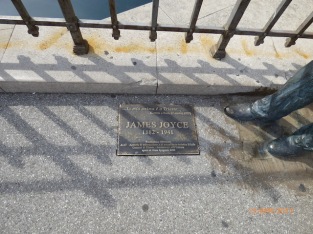 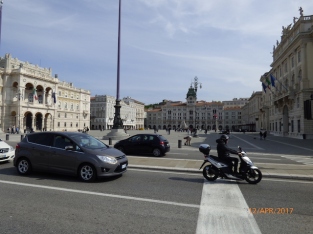 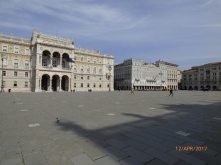 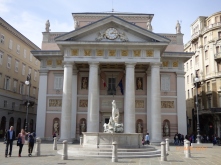 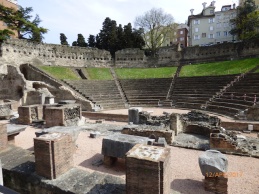 We loved Trieste – so much so that, after dinner in Sebo, we went back into the city to soak up the after dark vibe. It appeared to have a relatively young population – lots of youngsters just hanging together in the main piazza or enjoying an aperitif/beer/wine at the pavement cafes and bars. All very civilised and no sign of the loutish behaviour we often witness back home. Just serves to underline the cultural differences.

Tomorrow, we plan to head for Croatia – a country which, if I’m totally honest, we know relatively little about since we haven’t really done as much research on it as we should have done by this stage. One thing we DO know is that Wild Camping is a no-no so it’ll be campsites all the way. We plan to spend at least a month there so it’ll be a good chance to slow down and acquaint ourselves with a whole new culture.