Well, folks, as you can probably work out from the title, we LOVED Salamanca! Like most Spanish towns and cities, Salamanca has changed hands many times through the centuries and – during Roman times, it’s location on the Ruta de la Plata (Silver Route) from the Asturian mines to Andalucia, made it an important staging post and it thrived. Following the Muslim invasion of Spain, it repeatedly changed hands, and, with this, so it’s fortunes changed until the founding of Spain’s oldest university here in 1218 – almost a century before the foundation of Oxford! During The Spanish Civil War, it became, strangely enough, both the centre for liberal resistance to fascism AND the object of Franco’s efforts to forcefully impose compliance to his philosophy within academia. To this day, it continues to thrive and is currently Spain’s most prestigious university and has a huge influence on the city’s character.

It’s architectural wonders range from it’s Roman bridge (originally built in 89 AD!) spanning the Rio Tormes and still used as a pedestrian footbridge to this day to the wonder that it the Plaza Mayor – the central square, built between 1729 and 1755 -and, as stunning as it is during daylight hours, the whole place becomes magical after dark…. 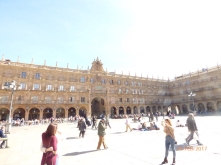 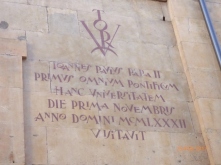 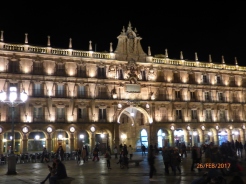 Everything about Salamanca left us awestruck! The campsite was pretty much perfect – quite enough at this time of year so we had a huge pitch all to ourselves and the showers and toilets were spotlessly clean with endless hot water and HUGE shower cubicles. The free WiFi was uber fast compared to other sites we’ve stayed on and the bus into the city centre stopped actually in the car park, every hour from early morning until 10.30pm. Perfect!

Saturday afternoon, we hopped on said bus and for the very reasonable sum of €2.80 return, we were slapbang in the centre of the old city within half an hour. Perfect! We did our usual meandering around, goggle-eyed at the intricate carvings on the numerous churches etc before finding Plaza Mayor and the Tourist Info from which to grab a map! It didn’t really matter as the city is so compact, a map really isn’t a necessity unless there’s something you really have in mind to see – we didn’t as it happens, we just like to meander!

We treated ourselves to some rather delicious ice creams and wandered around the Plaza Mayor, soaking in the atmosphere and marvelling at it’s stone carvings and people watching (particularly a group of young Spanish girls posing like supermodels whilst taking selfies!). On the way back to the bus in the early evening, we found an Irish bar showing the Ireland vs France match and, whilst we would have loved to have watched it there, we had a sudden pang of guilt about Harley being home alone for a number of hours and, being the responsible doggy parents that we are(!) jumped on the bus home and watched it on the iPad back in Sebo!

We vowed to treat ourselves to dinner out on Sunday evening so we went back in on the bus, explored the city a bit more before spotting yet another Irish bar, offering a pint of Kronenbourg and pinchos for €3 – get in!!!! We did, and had two pints and numerous plates of said pinchos (crisps, bite-sized slices of bread with chorizo/jamon, olives, potato omelette) as our “starter” before heading off to find a restaurant for dinner! Meson Churrasco fitted the bill – and we had a delightful main course each, a bottle of wine, one large beer and two coffees for a very reasonable €41.50. We pretty much rolled back to the bus stop, so full of grub were we – via the same Irish bar we’d found yesterday and, since we were way too early for the bus, we finished off the night with a Jaeger digestif (for me) and a pint for Roy. Hell, beats hanging around a cold bus stop!!

All in all, we had a FAB weekend and, once again, would thoroughly recommend Salamanca as a city well worth a visit!