Yes, folks, Team Sebo are back in Spain! After having a peaceful night’s kip at the summit of Portugal’s highest mountain range, Torre, we decided on Tuesday morning to go for a trek and so, wearing our thermal socks and polar jackets and with poles in hand, off we set. Unfortunately, our attempt to find any of the marked trails was rendered futile by the knee-deep snow lying on the ground! Thwarted, we ended-up walking down the side of a piste at the nearby ski resort as far as the bar at the middle station, where we rewarded ourselves for NOT falling OR twisting a knee when sinking knee-deep into The White Stuff, with a beer whilst sitting on the terrace watching folk skiing and boarding down the small selection of runs. I have to admit, I would have given ANYTHING to have had my skis with me!  Harley had a ball – eating snowballs and running around like a mad thing. I think it safe to say that he loves snow as much as he loves the water. 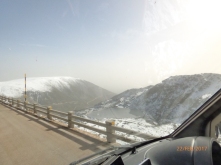 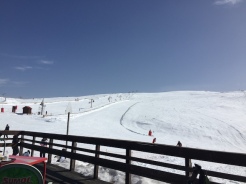 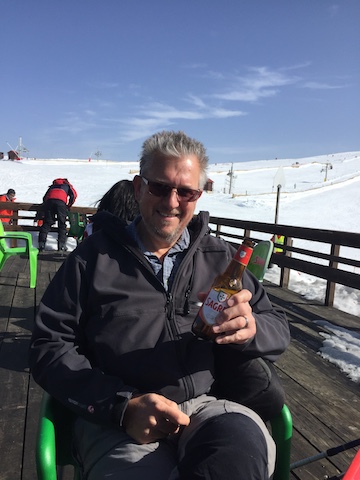 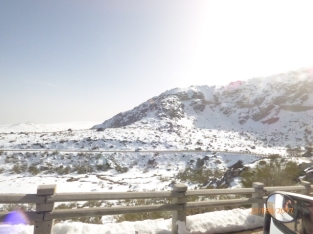 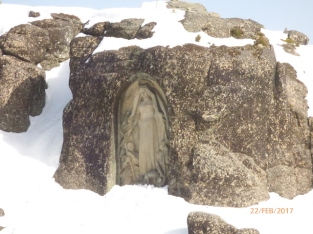 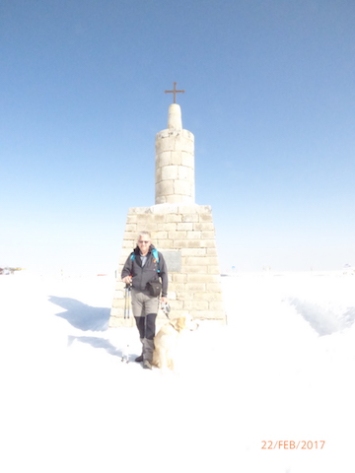 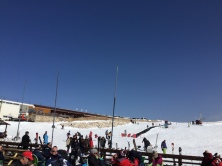 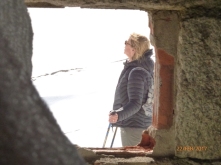 Later that afternoon, we drove back down to a nice wee free Aire at Belmonte. The local council here have, kindly, put in four motorhome/caravan parking spaces and a service point in a small park. There’s lots of picnic tables, three large BBQs and a toilet block containing showers (unfortunately, they’ve taken the taps off the showers – whether this is permanent or just for the winter, we have no idea but it would have been uber cool had they been working!). 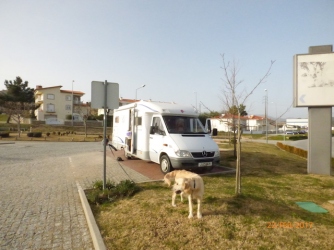 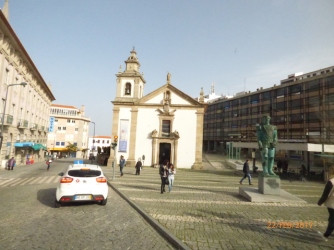 Unfortunately, the adjacent road was heavy with traffic from an early hour the following morning so we were awake earlier than usual (slightly, anyhow!). After topping up our water tank and ditching our waste, we hit the road towards Salamanca, Spain. Since this involved a 200km drive, we decided to split it over two days and, having consulted our Park4Night App, found a free overnight spot at Ciudad Rodrigo, some 100km away. CoPilot was given the co-ordinates and away we went, back over the border and into Spain once again. Remembering we hadn’t actually bought (or, in fact, even tasted!) any Port in the whole month we’d been in Portugal, we found a supermarket just before crossing the border and treated ourselves to a couple of bottles.

A bit of research into Ciudad Rodrigo (as in reading it’s Wiki page!) in no way prepared us for what we found on arrival. Imagine a smaller version of Carcassone, without the tat shops and THAT’S Ciudad Rodrigo. An absolute gem of a place with the most amazing architecture and pretty much intact walls surrounding the entire medieval city. They were all gearing-up for their famous Bull Carnival – one of the oldest in Spain, apparently. Not being fans of bull running and certainly no lovers of bull fighting, we had no real inclination to extend our stay to view the spectacle but our curiosity led to finding this video on You Tube – it does look good craic (apart from for those poor bulls!) but the film also shows lots of footage of Ciudad Rodrigo so you can see why we were so impressed by it. 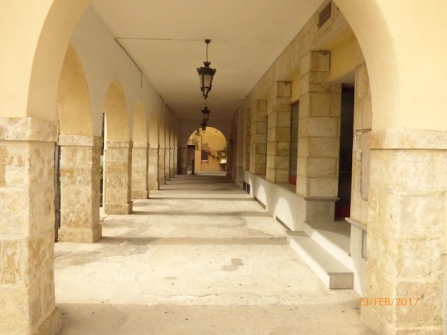 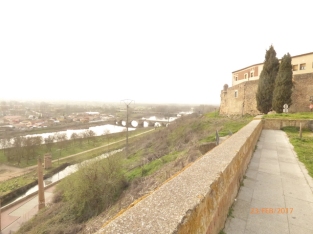 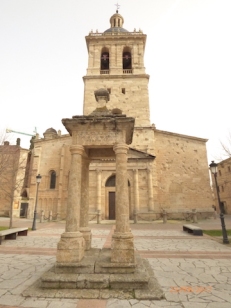 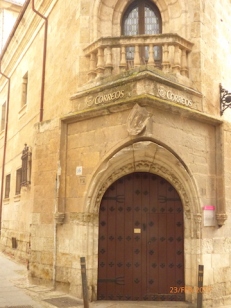 We took the easy way out this morning and drove through the high plains to Salamanca entirely on the motorway since it was free and cut about 50km and at least an hour off our journey. A stop at Carrefour restocked Sebo’s fridge, freezer and several lockers before we settled into our intended campsite for the weekend. Camping Regio is only 4km from central Salamanca, has great facilities and the bus into the city actually stops inside it’s car park! Handy or what??? There’s only a handful of fellow motorhomers here – mainly British – and the site’s free WiFi is about the best we’ve had so far so we’re delighted!

Being back in Spain has several advantages – much cheaper supermarket prices, much much cheaper diesel and an extra hour of daylight in the evenings which was very much appreciated this evening as we were still sitting out in our chairs at 7pm!

Tomorrow, we’ll hit the city and see what it has to offer – hopefully an Irish bar where we can watch the Ireland vs France Six Nations match…….