We had two choices for our route for today- either head South West to Alhama De Granada or South, back to the coast. We opted for the former as we’ve both agreed that we are more mountain than coastal people at heart. Alhama De Granada is a pretty historic town. Of Moorish origin, it suffered a massive earthquake in 1884, which destroyed 5000 homes in the town and left 800 of it’s residents dead! However, this earthquake also formed a pretty impressive gorge and the town was rebuilt, in traditional style, and has been very well preserved ever since. The gorge which appeared was subsequently used to power a hydroelectric power station but, with the building of a new, bigger dam further upstream, this is now obsolete, leaving the buildings and the gorge as an open air museum, with walking trails and spectacular views for visitors. At 825m above sea level and with free motorhome parking, we were, not surprisingly, drawn to it! It also has a thermal spring though, due to time constraints, we didn’t venture forth to see those – another excuse to return, possibly? 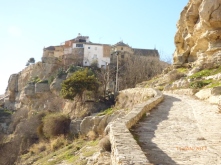 The full moon we saw rising through Sebo’s windscreen as we sipped our pre-dinner beer was a sight to behold!

Tomorrow, we head, reluctantly, back to the coast – the Costa Del Sol to be specific! I feel this will be another “Benidorm” experience so we’re going to spend the night in Mijas which, by all accounts, is less tacky than Benalmadena or Torremolinos! Here’s hoping….