Following yesterday’s “wrong trail” debacle, enjoyable though it was, we awoke bright and late in a pretty cold Sebo – the outside temperature showed a mere 1.7C and it wasn’t that much warmer inside! Heating was flicked on and a suitable waiting period ensued before either of us were brave enough to venture outside the duvet! Still, the sun was shining, the sky was blue and we were in just about THE prettiest of villages we had ever been in so we weren’t complaining! Our mission for this morning, before leaving, was to purchase some of the Jamon. So, suitably wrapped-up in thick socks, fleeces and polar jackets, we mooched around the village looking for said meaty provisions. We also took the time to have a better look at the older part of the town which we hadn’t really put much pass on yesterday whilst trying to find the walking trail signpost. Eventually, we found La Ruta De Trevelez – an artisan-type establishment filled with locally produced Jamons, chorizo, lomo, salami, honey , sheep’s cheeses, goats cheeses – the list was endless! Finally, we managed to restrict ourselves to a fine 1kg piece of Jamon Reserva ( dried for 24 months!), a chorizo and, whilst Roy refused the artisan’s offer of a whole goats/sheeps cheese for €8, we did succumb to a jar of Jamon Mousse which had better be good since it’s probably THE most expensive pate we have EVER bought….. 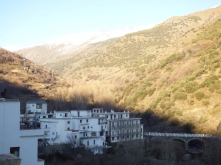 Much as we could quite happily have stayed put for another day and actually done the hike to the Lagunas (since we did, actually, find the start of said trail this morning!), we thought we may be pushing our luck with a third night in the free car park PLUS we have pre-booked tickets for La Alhambra in Granda for 2pm on Tuesday so we needed to be in Granada by this evening. We both agreed that we will, undoubtedly, return to Las Alpajurras at some stage and spend more time walking in this most beautiful region.

The drive to Granada was, again, one of spectacular views and winding roads. Passing small villages of whitewashed houses clinging to the hillsides – totally unspoilt! As we crossed the bridge coming out of Orgiva, we were gifted by the sight of a herdsman walking his goats across the almost dried-up riverbed – shouting words of encouragement to his charges in order to get them through the shallow water and over to the other side.

We marvelled at the civil engineering project of the road system here – the bridges are soooo high and the quality of the road is second to none! The dams which have been put in place to preserve that most precious of commodities – water-are another awesome achievement. This is one of THE driest regions in Spain but yet has such fertile agricultural land so fair play to them for using their water wisely! 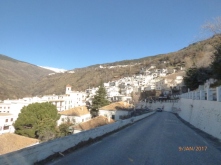 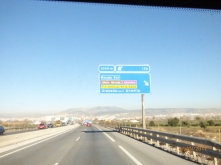 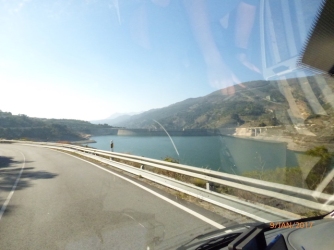 Finding our campsite in La Zubia this afternoon was the divil’s own job! We were doing so well, until we spotted a supermarket in a village close by and thus ignored the CoPilot- he vented his spleen at our rebellious streak by trying to send us down narrow, unmade roads, up one-way streets the wrong way blah blah blah. Eventually, we ignored him and found it ourselves! He’s now in the naughty corner for a couple of days to think about what he has done!