We woke up this morning in a mist – a real one, not a drink-induced haze! Thankfully, by the time we’d had our morning refreshments, it was starting to lift and we got our first real view of the snow-capped peaks of Les Pyrenees. We headed for Andorra, driving through the exceptionally pretty town of Ax-Les-Thermes – famous for it’s mineral baths.

The road up to Andorra is spectacular – a series of switchbacks winding up the mountainside. We did this on Foxy, our Honda VFR two years ago and loved it then! It’s just as spectacular in a motorhome -though maybe not quite so easy to negotiate the bends! We sailed across the border into Andorra without so much as a Border Official leaving their kiosk to check passports – presumably because it was, by this stage, hailstoning like you wouldn’t believe and the outside temp was hovering above freezing!

Andorra is not known for being at all motorhome friendly, having no official Aires that we are aware of, height restrictors on car parks etc etc – bit like being at home, in fact! Nonetheless, we filled up with the cheapest diesel ever ….

Our intention was to drive through Andorra then down into Spain and we did make a valiant attempt to climb the road to Canillo BUT, the hail turned to snow and whilst getting UP the col was one thing, what goes up must come DOWN and therein lay our dilemma…..commonsense kicked-in at this point and we turned around and headed back to Pas De La Casa to park up and do a bit of duty free shopping whilst reviewing our options! I have to say, we managed to exhibit a vast amount of self-restraint with the shopping…. buying only a 1.75l bottle of Bombay Sapphire gin ( which came with 350ml free!) for a mere €26.39 and a 1l bottle of Pastis for a whopping €3.59! How good were we???

More snow threatened so we turned around and left Andorra the way we came i.e we chickened out and drove around rather than over it! Having said that – brighter weather was now on the horizon and with us being pikey and not wanting to pay out the toll for the tunnel into Spain, we spotted an alternative toll-free route which took us up an awesome snow-free mountain col and down into our first taste of Catalonia – Ripoll. 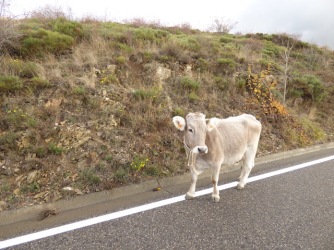 The Aire at Ripoll is free, just a short hop over the river from the old town and has services if you require them ( we didn’t but good to know they are there!). It was almost dark by the time we parked up and shortly afterwards, the rain started – torrential rain at times, accompanied by thunder and lightening which seemed to circle around the town for several hours! The rain in Spain falls mainly on……The Semples????!!!?? Apart from taking a reluctant Harley out for a quick tinkle, we never left the van this evening!! Hopefully it will improve enough by the morning that we can take a mooch around town before we leave!