OK, so hands-up all of you who know what happened in Oradour-Sur-Glane…..hmmm, not many I can bet. I have to admit, I never knew until I happened to be reading our Lonely Planet Guide to France and happened upon it. Since the place is on our route down to Limoges, we thought we’d swing by this morning and take a look at the Museum there.

I’m just going to copy and paste Wiki’s account of the horrific events at Oradour-Sur-Glane – purely to save upload time so, thanks Wikipedia!…

“In February 1944, the 2nd SS Panzer Division (“Das Reich”) was stationed in the Southern French town of Valence-d’Agen,[1] north of Toulouse, waiting to be resupplied with new equipment and fresh troops. Following the D-Day invasion of Normandy in June, the division was ordered north to help stop the Allied advance. One of its units was the 4th SS Panzer Grenadier Regiment (“Der Führer”). Its staff included regimental commander SS-Standartenführer Sylvester Stadler as regimental commander, SS-Sturmbannführer Adolf Diekmann commanding the 1st Battalion and SS-Sturmbannführer Otto Weidinger, Stadler’s designated successor who was with the regiment for familiarisation. Command passed to Weidinger on 14 June.[2]

Early on the morning of 10 June 1944, Diekmann informed Weidinger that he had been approached by two members of the Milice, a paramilitary force of the Vichy Regime. They claimed that a Waffen-SS officer was being held prisoner by the Resistance in Oradour-sur-Vayres, a nearby village. The captured officer was claimed to be SS-Sturmbannführer Helmut Kämpfe, commander of the 2nd SS Panzer Reconnaissance Battalion (also part of “Das Reich” division). He may have been captured by the Maquis du Limousin the day before. Stadler ordered Diekmann to have the mayor choose thirty people to be hostages in exchange for Kämpfe.

On 10 June, Diekmann’s battalion sealed off Oradour-sur-Glane and ordered all the inhabitants – and anyone who happened to be in or near the town – to assemble in the village square to have their identity papers examined. The SS also arrested six people who did not live in the village but merely happened to be riding their bicycles through there when the SS unit arrived.

The women and children were locked in the church and the village was looted. The men were led to six barns and sheds, where machine guns were already in place.

According to a survivor’s account, the SS men then began shooting, aiming for their legs. When victims were unable to move, the Nazis covered them with fuel and set the barns on fire. Only six men managed to escape. One of them was later seen walking down a road and was shot dead. In all, 190 Frenchmen died.

The SS men next proceeded to the church and placed an incendiary device beside it. When it was ignited, women and children tried to escape through the doors and windows, only to be met with machine-gun fire. 247 women and 205 children died in the brutal attack. The only survivor was 47-year-old Marguerite Rouffanche. She escaped through a rear sacristy window, followed by a young woman and child.[3] All three were shot, two of them fatally. Rouffanche crawled to some pea bushes and remained hidden overnight until she was found and rescued the next morning. About twenty villagers had fled Oradour-sur-Glane as soon as the SS unit had appeared. That night, the village was partially razed.

Several days later, the survivors were allowed to bury the 642 dead inhabitants of Oradour-sur-Glane who had been killed in just a few hours. Adolf Diekmann said the atrocity was in retaliation for the partisan activity in nearby Tulle and the kidnapping of Helmut Kämpfe.

After the war, General Charles de Gaulle decided the village should never be rebuilt, but would remain a memorial to the cruelty of the Nazi occupation. 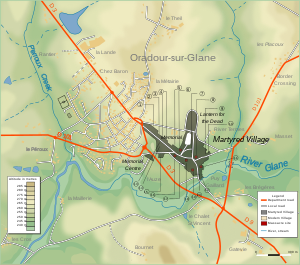 The new village of Oradour-sur-Glane (population 2,375 in 2012), northwest of the site of the massacre, was built after the war. The ruins of the original village remain as a memorial to the dead and to represent similar sites and events.

In 1999 French president Jacques Chirac dedicated a memorial museum, the Centre de la mémoire d’Oradour, near the entrance to the Village Martyr(“martyred village”). Its museum includes items recovered from the burned-out buildings: watches stopped at the time their owners were burned alive, glasses melted from the intense heat, and various personal items.

On 6 June 2004, at the commemorative ceremony of the Normandy invasion in Caen, German chancellor Gerhard Schröder pledged that Germany would not forget the Nazi atrocities and specifically mentioned Oradour-sur-Glane.

On 4 September 2013, German president Joachim Gauck and French president François Hollande visited the ghost village of Oradour-sur-Glane. A joint news conference broadcast by the two leaders followed their tour of the site. This was the first time a German president had come to the site of one of the biggest World War II massacres on French soil.”

We wandered around the Martyr Village pretty much in silence – words cannot express the horror of the events which occurred that day. I, personally, felt as saddened as I did when we visited Auschwitz last year!

We decided to head south after this to another free Aire at Rouffiac-en-Perigord – a place I’d visited previously with friends. Rouffiac is one of many “base de loisirs” provided by the local council – a large lake, with a swimming beach, watersports, an adventure centre, campsite and great walking trails. It started to rain again just as we parked up but, not ones to shirk our parental responsibilities, we donned out waterproofs and took Harley for a stroll through the woods. I’d like to think he appreciates the sacrifices we sometimes  make…

We’ll do one of the longer official walking trails tomorrow morning before we leave – he may even get a swim!