Today, we’re heading for Amboise in the Loire Valley but before we left, we treated ourselves to an almost Ulster Fry by plundering our precious bacon supplies from our freezer. I say “almost” since I forgot to get sausages out….plus we also forgot to buy mushrooms yesterday! But bacon, egg, beans and toast is a rare treat for us now so we really enjoyed it! Sad, I know….

We had thought to venture through Tours Centre Ville on our way to Amboise, it being a Sunday and, hence, likely to be little traffic about, but, although it’s a city I would have some knowledge of, albeit from many years ago, I hadn’t reckoned on them having put in a tram system!! That, together with roadworks and CoPilot persistently directing us away from the city centre, we chickened out for fear of getting stuck down some narrow little backstreet in a 2.3m wide motorhome! Pity,as I remember it to be a city well worth a visit and, maybe, some day we’ll make more of an effort on that score. 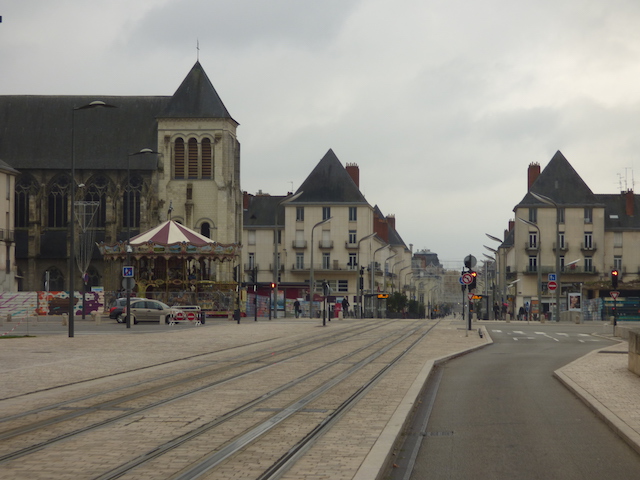 Anyhow, we carried on to Amboise and found a free Aire just 5 minutes walk from the centre. No services but we didn’t need water or anything so no matter. We planned on visiting Le Clos Luce- Leonardo Da Vinci’s final home- on Monday morning and this parking spot couldn’t have been handier – or so we thought….more on that later! The afternoon was spent mooching around this very pretty old town with it’s stone arches , cobbled streets and impressive chateau – even better, the rain had finally stopped and the temperature had risen enough to be classed as “mild for the time of year”…..happy days. 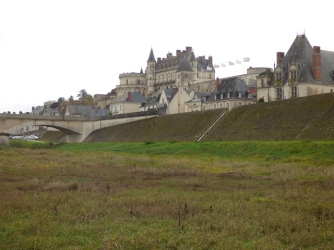 At this point, we took a communal decision to treat ourselves to dinner out – since we were parked close enough to town, and there were lots of restaurants to choose from, it seemed a pity to waste the opportunity. We sussed a nice little place, La Florentine, offering a 3 course menu for €18.50 – same price in the evening as lunchtime ( a very rare thing in these parts!). Decision made, we headed back to Sebo , Harley was duly fed and watered, and we got ready to venture out in all our finery i.e clean jeans and the least crumpled shirt/blouse we could muster! I even gave my boots a clean in honour of this momentous occasion!

Dinner at La Florentine far outdid our expectations of an €18.50/3 courses – we both ordered a Gesier Salad which was to die for, then Roy got his longed-for pizza(yeah, I know!!) and I went for the salmon fillet with lentils! Yummmmmm! Desserts were HUGE….Tarte Tatine with ice cream for Roy and my Panacotta with Forest Fruits tasted every bit as good as it looked. A nice bottle of reasonably priced Bordeaux and a cup of coffee finished it all off nicely and at €56 we felt we’d had good value for our hard earned dosh. Service was excellent too!

We turned-in for the night in our “quiet” little spot only to be woken at an unreasonable early hour by what seemed to be a convoy of bin lorries and other assorted work vehicles parking up then leaving. Our “Aire” also doubles up as a car park and, apparently, a workman’s tea break parking up spot! Grrrrr.

We walked the 400m or so to Le Clos Luce only to find that we could have parked up there for €4 for the night and it would have been MUCH quieter since, when we arrived at 10am, there wasn’t a single vehicle on the car park! Doh!!

Anyhow, for those who don’t know, Le Clos Luce was where Leonardo Da Vinci lived for the last three years of his life from 1516-1519. It is now a very impressively restored 15th Century chateau dedicated to the Great Man Himself – a genius, several centuries ahead of his time, he was not only a highly talented artist but also an architect, engineer and inventor. His drawings have been used to produce models and fifty of these are displayed at Le Clos Luce – well worth a visit. 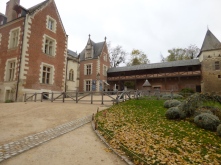 I last visited Le Clos Luce back in 1989 and I’m amazed at how much has been added to the museum. The gardens particularly have been very tastefully developed with working models of Da Vinci’s inventions and copies of his original botanical drawings displayed alongside the very plants that he so painstakingly drew. Breathtaking!

As if a few hours at Le Clos Luce wasn’t enough culture for one day, we headed over to Chenonceaux to view one of THE most stunning of the many Loire valley chateaux. 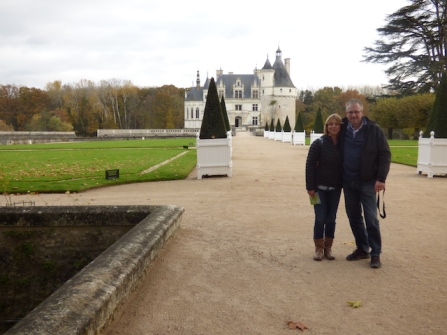 Chenonceau was basically built, and then added to, by a succession of females and it certainly has a “feminine” touch. The 60ft Gallery spanning Le Cher is spectacular! The chateau has been exceptionally well restored and it’s gardens are immaculate – again, well worth a visit.

Our sleepy spot for tonight is a teensy free Aire in a sleepy village called May just outside Athee sur Cher. Three spaces and free water  etc, we only have one other van in here with us and, for once, he is smaller than we are!

One thought on “Almost an Ulster Fry…..”