On our second day in the mountains, we attempted to walk the hills around our sleepy spot at Campigna in ridiculously hot weather – we didn’t venture too far, to be honest, and tried to keep in the shade of the forest as much as we could because, considering we were at 1400m above sea level, our temperature gauge was still registering 32C during the day! Still, the views from our turn around spot picnic table were spectacular and made it worth the effort. 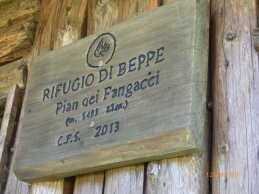 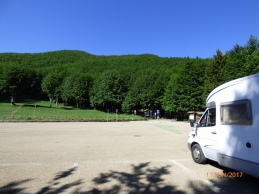 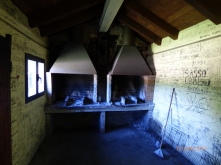 There had been a number of vans parked-up at Campigna over the weekend but, come Monday afternoon, we were only one of three left, the rest, all Italian, presumably having gone back to work! We decamped on Tuesday morning, and headed for Sant Sofia to make use of their free service point to dump our waste and refill our freshwater tank. We had a loose plan to stay here overnight and have a wander around the town but it was just too hot to venture outside for too long so we just availed of the facilities and then headed to Ridracoli where there was a river and a huge lake to cool Harley down. This turned out to be an absolute gem of a find! There was a campsite adjacent to the Ecomuseum but, to our delight, there was a free car park just before the campsite turning so we pulled in there instead and saved ourselves a substantial sum of money (€22/night, according to a very chatty German fella we happened upon later in the day!). Happy Days! 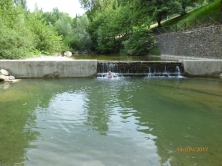 A quick drive up to the Dam entrance on Tuesday afternoon revealed that it costs €5/person admission and, although the parking is free, we had to be out by 7pm so we decided to spend the day in there on Wednesday – get our monies worth and all that! With the heat being what it was, we made use of the water font at our sleepy spot and got a huge amount of washing done – it dried within half an hour of being hung out to dry! We also made good use of the uber clean river water coming from the lake to cool ourselves and Harley by indulging in a family swim.

Wednesday’s visit to the Diga di Ridracoli was fabulous! We had a great parking spot for the day, took a walk over the dam to the Rifugio and then returned to the picnic spot alongside Sebo for lunch. 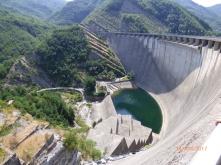 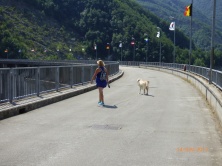 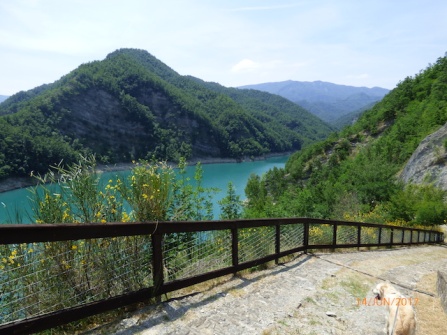 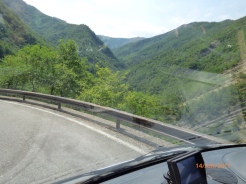 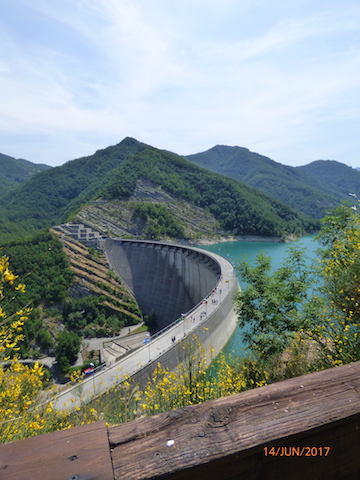 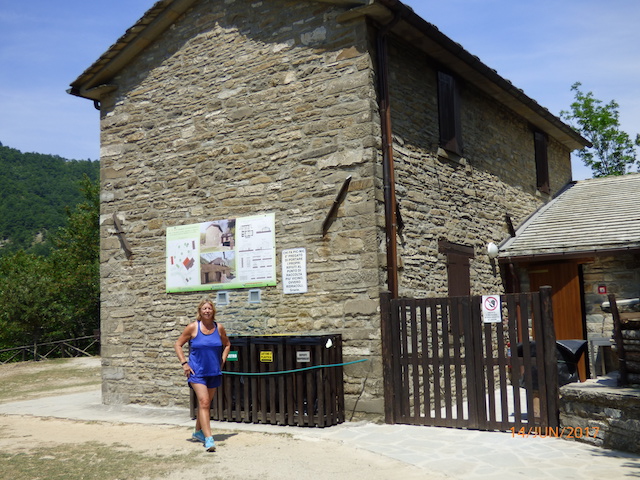 We even took a look at the Idro Ecomuseo delle Acque di Ridracoli, entrance to which was included in the Dam Entrance fee – a very well put together display of the animals living in The Park, the logic of building the dam and the areas it supplies etc etc. The only downside was that it was all in Italian so we could only look at the exhibits and have a stab at understanding what we could but they had an awesome 3D movie showing the Park and the Lake through the four seasons of the year – very well shot and edited! We were uber-impressed!

Thursday saw us heading for Bologna airport where the temporary farewells were bade in a rather hurried fashion due to the 10 minute free Kiss ‘n’ Fly drop off point parking!

My weekend was spent being reunited with my daughters and mother and various other extended family members in Wexford and attending My Eldest’s PhD Conferral Ceremony in Dublin on Monday, whilst Roy and Harley headed for an adrenaline rush at The San Marino World Superbikes Championships in Misano. Two very different weekends for us but enjoyable for all! 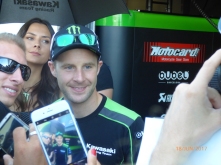 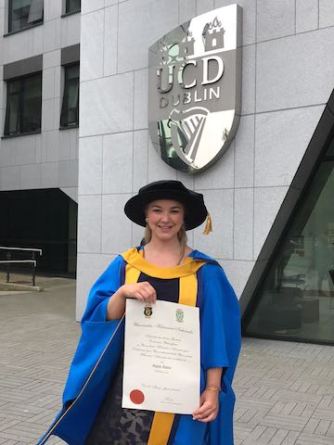 Neither of us got much respite from the searing heat and, by the time I landed back in Bologna on Tuesday afternoon, we were both praying for an end to the heatwave for a while! Yeah, we see the irony of that statement……having spent most of the winter avoiding rain and snow in Spain and Portugal whilst desperately seeking sunshine, now we’re trying to avoid it!

Moving swiftly on……I managed to arrive back in Bologna and escape the confines of the airport just as Roy pulled up at the entry barrier to the Kiss ‘n’ Fly drop off point – unfortunately, there was a queue of cars behind him so we had no option but to pull a ticket and pick our way carefully through the abandoned cars at the kerbside. No problem, we thought – we’re well within the free 10 minutes time so we’ll just put the ticket into the exit barrier and away we go. Wrong!!!! Said exit barrier machine read our ticket and said we had to pay €10!!! What? How can that be??? Attempts to contact the info desk by pushing the button resulted in nothing but a message saying the line was busy! Meanwhile, numerous cars were piling up in a rather impatient queue (well, this IS Italy and patience is most definitely NOT a virtue!) behind us, beeping horns etc. Eventually, a guy in a high viz jacket appeared and informed us that, as a motorhome, we were not entitled to the free 10 minutes and we had to pay up! Hmmm, so how come that wasn’t the case last Thursday when Roy dropped me off and exited for free??? We had no option but to pay but we weren’t too happy about it, I can tell you!

We decided to try to escape the heat and head for The Dolomites but, since it was now early evening, we parked-up on a car park in Este for the night – a nice enough wee car park across from the cemetery so the night was dead (!) quiet, until a whole bunch of starlings or some such started chattering away at the crack of dawn! We didn’t even take a wander around the town before leaving on Wednesday morning to wend our way North to Madonna di Campiglio, which is where we are now but I’ll fill you in on the journey here in our next post. All I’ll say is……it was awesome!