Our stay at the awesome Camp Zagreb was punctuated by blistering heat (37C at one point on Wednesday afternoon!) and an almighty storm on Wednesday night which circled around us for what seemed like hours before any rain fell. There was something almost surreal about sitting under our awning, BBQing our dinner, whilst watching the repeated flashes of lightening illuminating the night sky in every direction and listening to the rumbles of thunder getting louder and louder. Roy managed to catch the lightening in a couple of video clips…..

That was our entertainment for the evening, until the rain started to fall – at which point we headed inside to indulge ourselves in the new series of House Of Cards on Netflix, just released and eagerly awaited by Team Sebo ever since we watched the previous series back-to-back (almost!) some months back. Sad, I know!

On Thursday, we headed off into Zagreb for a few hours, walking the 2km to the nearest station (we were up too late to avail of the camp’s free shuttle service!) and getting the train straight into the Lower Town – handy enough and, at just 24kn each for a return ticket, we were delighted we hadn’t bothered driving in and parking up! Unlike Dubrovnik and Split, Zagreb, Croatia’s capital city, is more Austro-Hungarian than Venetian and, to be honest, we were a bit underwhelmed by it. Maybe we’d just been totally spoiled by the stunning architecture and narrow, cobbled streets in Split and Dubrovnik but, by comparison, we found Zagreb to be quite austere looking. Great place if you’re into Art Museums and galleries – there’s numerous here – but we’re not, so we found little of much interest, to be honest. We pretty much did the walk around the city as recommended by Lonely Planet and we ventured inside the quirky Museum of Broken Relationships – quite interesting and well put together but not, to our minds, worth the 30kn each admission price. The Dolac Market was just about still open when we arrived – seemed to have a pretty good selection of fruit and vegetables and the indoor fish market would have been a great place to buy dinner, had it not been for the 30C heat (our fishy dinner would have been cooked by the time we got back to Sebo!) but well worth a gander if you’re ever in Zagreb. 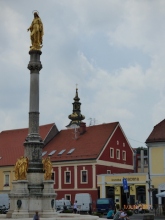 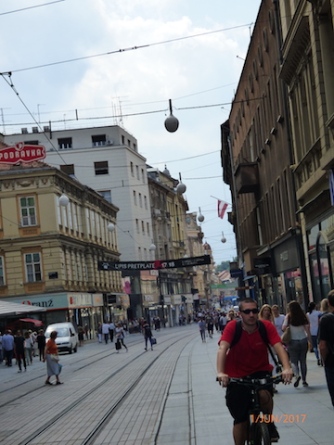 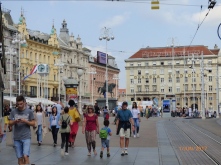 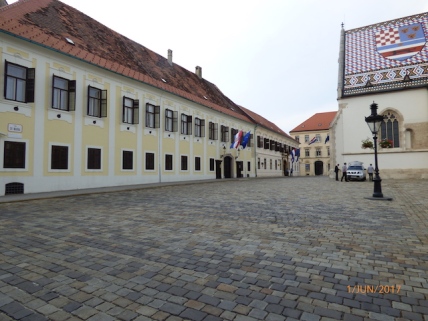 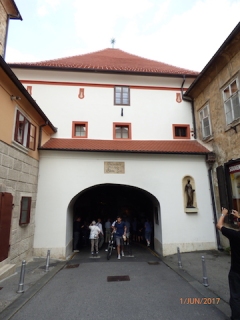 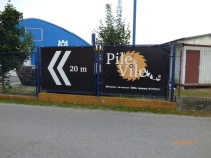 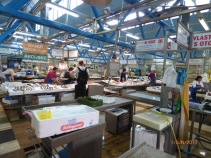 In it’s favour, Zagreb is less touristy than Croatia’s other cities and, thus, is cheaper for eating and drinking, and it has a great shopping street, if that floats your boat! We both reckoned it would probably have been better for us if we’d gone in for the evening as, just as we were leaving, the place seemed to be coming alive with open air bars getting ready to open in the parks etc – maybe we might’ve seen a different side to the city. Anyhow, too late now! Never mind…. Slovenia’s Lake Bled beckons for the weekend and that looks amazing!