Apologies for the lack of ramblings here lately but we’ve been rather busy being totally enthralled by another of Croatia’s beautiful National Parks PLUS, summer has finally arrived and we’ve spent most of our time out of doors, soaking up the sun’s rays!

Anyhow, where were we? Oh yeah, we were in Zadar when we last posted and that was over a week ago! Yikes! How time flies when you’re having fun! So, on Thursday, May 4th, we left Zadar and, having had a very picturesque drive, mostly along the coast, still struck by the awesome road surfaces, lack of traffic and all round fabness of the Croatian coastline, we pitched-up at our chosen site, Camp Marina, just a short walk from the entrance of The Krka National Park. Our ACSI App had given us two choices here – Camp Marina and Camping Krka, located adjacent to each other, and, on paper at least, there was little to choose between the two. Their prices matched, as did their facilities and their distance from the National Park entrances. We chose Camp Marina as it was slightly smaller and we were intrigued after reading a couple of reviews posted by previous motorhomers – both had arrived with the intention of spending just a few days but both had ended up staying much longer – in one case a whole month! Plus, every reviewer raved about the camp restaurant’s offerings. We were sold! Our arrival vindicated our decision when we were met at the entrance gate by two happy, smiley-faced ladies, waving frantically, like they were welcoming a long-lost friend! One of whom, we later found to be Marina herself, walked around the site with us, showing us which pitches were available and suitable for Sebo’s size. We later discovered that all the smiley-faced frantic waving was a tactic used to draw folk in BEFORE they got chance to take the next entrance into the “opposition” at Camping Krka! We got hours of entertainment out of it over the next few days and evenings – the woman must’ve been as fit as a butcher’s dog! She could spot an oncoming motorhome/caravan at a distance of several hundred metres and would run from wherever she was on the site to the entrance gate to hail anyone who showed signs of slowing down and turning left! Fair play for her persistence and, it has to be said, it seemed to be working as, when we arrived, only a few pitches were occupied but, by Friday night, she was squeezing them in anywhere she could, so many had she managed to draw in!

On Friday, we walked the 2.5km up to the Losovac entrance of the National Park. The whole Park is a UNESCO site and covers a huge area. Admission is not necessarily cheap but includes bus and boat excursions for those who don’t want to walk. Having Harley with us (and our refusal to muzzle him!) meant we couldn’t avail of the boat trip but, to be honest. we enjoyed the walking trails over and alongside the river and waterfalls, so we don’t feel we lost out. We invested in a 3-day ticket which gave us unlimited access for three days out of seven – cost 230kn (€29.90) each but, since a 1-day ticket cost 110kn (€14.30) and we intended making three trips in over the next few days, we got good value.

The longest waterfall, Skradinski buk, was breathtakingly beautiful and, as seems to be the norm for Croatian National Parks, had a number of boardwalks over the river, with lots of info boards regarding the geology and the ecosystems to be found here -birds, reptiles, fish, insects, plant life. So well thought out and maintained, it all goes to demonstrate how much pride the Croats have for their country. We were awestruck by the whole thing – once again, the photos cannot possibly do the place justice but they’ll give you some idea of it’s beauty. 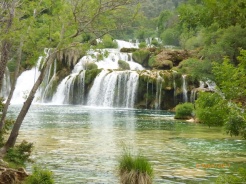 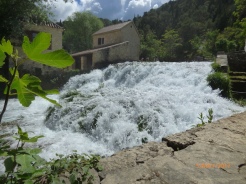 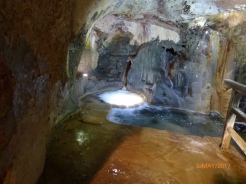 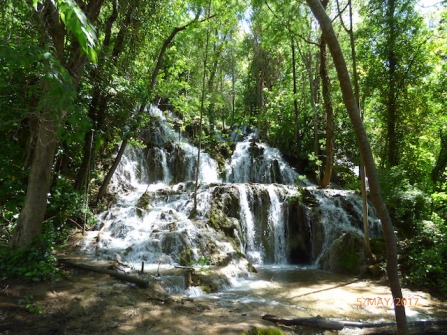 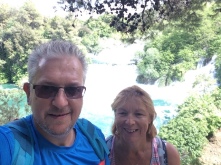 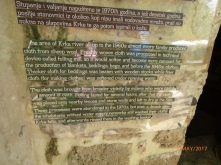 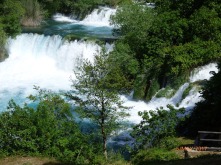 We took a Team Sebo decision to avoid venturing back to the Park on Saturday and Sunday – it was quite busy on Friday and we reckoned it might be even busier at the weekend. Harley, it has to be said, had thoroughly enjoyed his day though – lots of young American tourists around and the girls made a beeline for him. He was, once again, star of the show and lapped-up the attention in his usual shameless manner.

So, we spent the weekend catching-up on domestic chores, walking the short trails through the woodlands outside of the camp, lolling in the sun and being entertained by Marina’s touting of unsuspecting prospective customers. On Saturday night, we treated ourselves to dinner in the restaurant. The place was packed when we got there but we were squeezed in at a table for two and ordered our food – we both opted for leg of lamb, cooked over a wood fire. It was delivered to us on a huge platter, with enough food to feed a family of four for a week, to be honest but we did our best to finish it!

With two large beers and a litre of house red, with a couple of “on the house” cherry brandies thrown in, the bill came to 300kn (€39!). Considering we were in a campsite, 2.5km from absolutely anywhere, they could have charged much more and we would have willingly paid it! Another great attribute of The Croats – no “rip-off” mentality! Our pitch in this wonderful place was costing us a mere €13/night, with electricity, wifi, use of a swimming pool and the cleanest, most practical showers (the first we’ve come across with shower curtains so your clothes don’t get showered too!), and with ample hot water for showering and washing clothes/dishes. The longer we stayed here, the more we understood the reviews which had brought us here in the first place!

On Monday, we walked the 5km to the Skradin Park entrance and then headed up the 4km riverside path which took us back to Skradinski buk and then on to the Losovac entrance. By this stage, we were both hungry and thirsty and partook of a couple of drinks and a bite to eat at one of the bars just outside. I had a hot dog, served in the biggest half baguette I’ve ever seen, Roy a humungous cheeseburger with all the trimmings and, with a couple of large beers, we paid a grand total of 65kn (€8.45!! Seriously!!) Just as well we have Harley with us – his requirement for regular exercise in the form of long walks is, hopefully, limiting our inevitable weight gain! 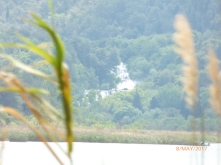 On Tuesday morning, we managed to drag ourselves away from “Hotel California”, with assurances to Marina that we had thoroughly enjoyed our time there, that everything was perfect and that we would, for sure, return at some stage – and we meant every word!

Our final day’s admission to Kirka NP was to be spent at Roški slap a 45 minute drive from Losovac. It’s possible to take a boat excursion from Skradinski buk to Roški slap but it takes 3.5 hours, apparently, and, though it would be a fab way of viewing the Park, including the Visovac monastery, we couldn’t leave Harley in Sebo all that time, especially in the heat, so we opted to drive up instead so that he could walk around with us. Absolutely stunning waterfalls and high cliffs met us and Roy even ventured the 547 steps up the wooden staircase to view the Oziđana pećina cave. Myself and Harley stayed by the water! 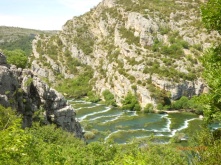 Well worth a visit if ever you’re in Croatia!

We’re now heading south, towards Split and our chosen sleepy spot for a few nights is Camping Rozac, on the beach, within walking distance of Trogir, just 20km or so north of Split, where we’re hoping to meet up with some of my old sailing buddies who just happen to be chartering a rather swish Lagoon 450 catamaran out of Split this week. Just another action-packed week in the life of Team Sebo? You bet!!