Tuesday’s forecast for Pula was, quite frankly, dire! Shower at noon, followed by more at 3pm, with increasing northerly winds. Nonetheless, we Die-hards waited until the noon shower had passed before donning our boots and waterproofs and walking the 3km into Pula town centre. Needless to say, the forecast was wrong and, before we reached our destination, the rain had started to fall once again and we got a proper soaking! Grrrr!!! We walked as far as the Roman Amphitheatre, didn’t venture inside and then decided to call it quits and find somewhere for lunch. We had Harley with us and, with the weather being less than conducive to eating outside, we managed to find a grateful lassie in a small restaurant willing to accomodate both us AND a very wet dog! In fairness to Pula, we really didn’t see it at it’s best but, judging by the info boards dotted around town, most of it’s old buildings were demolished either during or  after a bombing raid by The Allies during WWII!! Oh well, at least we saw where they USED to be and, thankfully, the Roman Amphitheatre managed to survive! Lunch proved to be more than adequate at a very affordable price so we were happy enough, if a little cold! 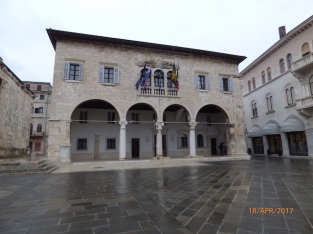 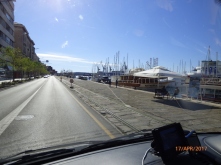 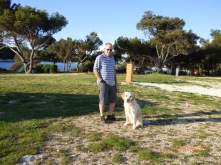 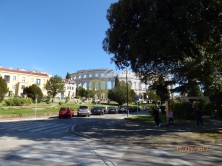 A long queue in the Post Office to buy a VIPme data SIM card was rewarded with 1GB fast data per day for ten non-consecutive days (reducing to a much slower 64mbs if one manages to eat more than 1GB in 24 hours- we somehow manage to do this on a regular basis though God only knows how!) for the reasonable sum of 85kn (less than a tenner in Sterling and around €11.50).

On Wednesday morning, the rain  had, thankfully, ceased to fall and we left our pitch in Pula to head south to Krk Island. The largest island in the Croatian archipelago, it lies off the west coast of the Croatian mainland and is accessible by a road bridge, albeit tolled. (46kn – around a fiver in Brit dosh) Still, it seemed to be worth a visit and the toll was much cheaper than a ferry! The drive down was totally stress-free! Even through Rijeka, Croatia’s third largest city! No hassle, no kamikaze drivers and great road surfaces! Team Sebo were on a high by the time we arrived at Camping Bor, just 1km above Krk Town, where we were given a great welcome (in perfect English, I may add!), told to choose whichever pitch we wanted (he even advised on which had the best view, which would be most sheltered from the fierce wind that was now blowing) and given a voucher for a free glass of wine each in the camp restaurant. At €19 a night with our ACSI discount card we certainly weren’t complaining as we chose a pitch with a fab view over the old town, the Adriatic and the snow-topped mountains back on the mainland. A quick look at the restaurant menu also revealed affordable choices so we vowed to eat there one night at least! We’d planned to stay for just two nights but, after the first night, we decided we’d stay for longer! The family run site was spotlessly clean and we were parked amongst the fig trees and olive groves, with an awesome view and within a ten minute walk of the town, with, we later established, two fab marked walking trails of 14km and 9.5km right on our doorstep! Why would we move???? We were in absolute Croatian Heaven! 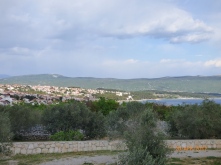 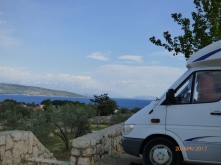 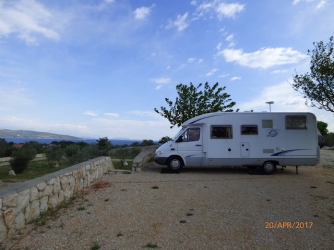 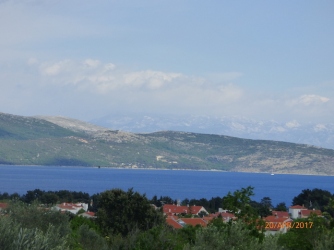 A walk down to Krk Town later confirmed our love for Croatia and it’s people. Spotlessly clean, narrow winding streets and a beautifully presented waterfront, lined with restaurants on one side and boat moorings on the other, made it a very pleasant place to while away a couple of hours with a couple of beers in the sunshine. So pleasant, in fact, that we made the bar our “local” whilst we were there! On Thursday lunchtime, we shared a starter plate of local dried ham with bread and locally produced olive oil – it was HUGE and, at just 55kn (less than €8!), excellent value! With the bill, came two glasses of fig brandy “on the house”. Nice one! We’ll be back! And we were….. 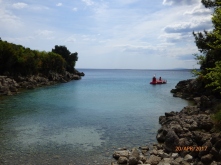 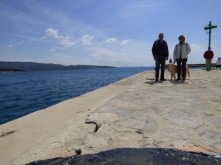 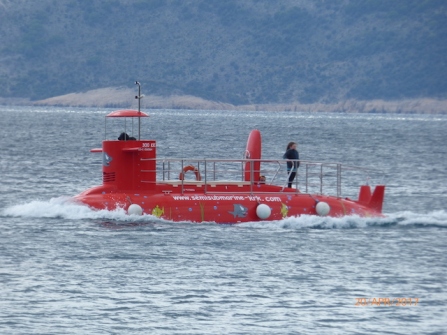 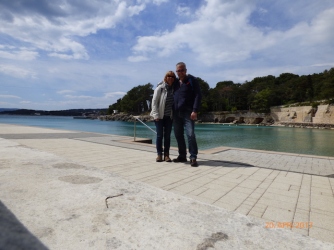 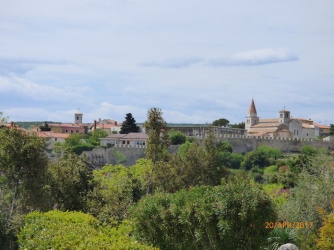 Thursday night’s dinner was taken in the campsite restaurant – an absolute delight, despite us being the only diners! THE most tender pork chops I have ever tasted were served to me and Roy’s green pasta with prawns seemed to last forever! All served with our free glasses of home-produced wine, along with a further litre of the same wine, for less than €30!

On Friday, with the sun shining, and with all three of us in dire need of a long walk, we packed a picnic and headed off on one of the Olive Grove Walking trails we’d seen advertised – an exceptionally well-marked trail (yes, folks, even WE couldn’t get lost on this one, so frequent were the markers!) through the olive groves for which the island is famous, with awesome views of the sea and with lots of info boards regarding medicinal herbs growing alongside the trail. 14km of easy walking led us back down into town and, naturally, by this stage we were all in need of liquid refreshment so we hit the same bar we’d visited the day before. Once again, before we humans were asked what we’d care to order, Harley was given a bowl of water with which to slake his obvious thirst! Once again, with the bill for the two rounds of beers, came the “on the house” fig brandy. Subsequent chat with the waiter revealed that his “wife’s brother’s wife” hailed from Downpatrick and the happy couple now live in Galway, with their four daughters and that, said waiter, had been to The Fields Of Athenry and had just booked flights to go visit again in November……. in fact, he spoke English better than we do! Shame on us for not having more than two words of Croatian between us! Anyhow, the evening ended-up with us buying a litre bottle of fig brandy (if you haven’t tried it, you absolutely must, even if you’re not a brandy drinker!!), for less than we would have paid for it in a local shop – it came to us in a sparkling water bottle, filled from the barrel of the delicious fluid in the bar’s cellar! Needless to say, we need to either ration it OR swing by there again on the way back up to Italy later!

On Saturday, we did the second Olive Grove Trail, over the other side of town – 9.5km of excellent walking, with, once again, awesome views. We were delighted! 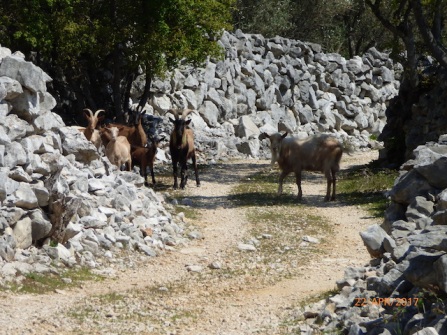 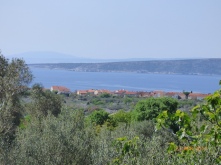 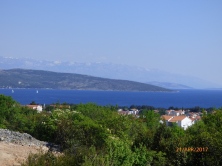 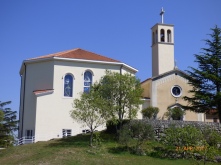 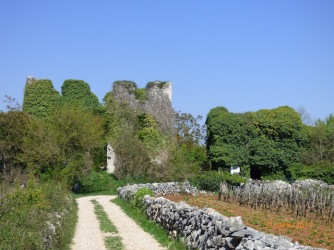 This morning, we had to drag ourselves away from our sleepy spot but, since it was only 47km to our next one, we weren’t about to complain! Another stress-free trip back over the road bridge (free this time) and a quick swing by Lidl to restock our wine store and we were on our pitch at Autocamp Selce back on the mainland in time for lunch. 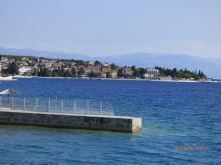 We’ve pushed the boat out here and opted for a slightly more “upmarket” pitch than the €17/night ACSI pitches available so as to be in a sunny spot nearer the sea, with water and drainage on the pitch – a whole €22/night including electricity! It has the added advantage that we’re also sheltered from the fierce wind that was blowing when we arrived! We’ll stay here for a couple of nights then decide where we head to next – the beauty of having no real time constraints!