Our peaceful sleepy spot in Soria proved to be exactly that -yup, we slept like three babies! When we did, finally, awaken, it was to a chilly but sunny day so we decided to take a morning stroll downriver with the intention of then hitting the high viewpoint above the town. Unfortunately, we couldn’t find any sign of a path up to the highpoint and, instead, we followed the trail into the town centre! What a revelation! A totally unspoilt-by-tourism working town – buzzing with “everyday life” – shoppers shopping, workmen working and some of the most beautiful town squares we’d ever seen. A pleasant surprise! Funny how things turn out when you least expect it…. 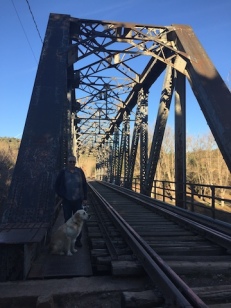 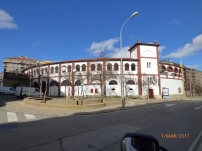 Unfortunately, it was time to move on – we’d thought we might spend a few days in Zaragoza but, unfortunately, this proved not to be the case! The lush, productive “high plains” turned into an arid, industrialised, uninteresting landscape, made worse by horrendous traffic as we approached the city. We just about managed to find the promised Aire, offering free services but totally unsuitable as an overnight stop – too noisy, being alongside a busy motorway, and too far out of the city centre to be of any use to us sightseers! Another possible overnight stop – within a 10 minute walk of the centre-was totally unsuitable, being oversubscribed and not negotiable in an almost 8m long motorhome! Nonetheless, we optimistically parked-up temporarily in the “tourist bus only” stop opposite to review our options/wait for a parking space, having already wasted a full 5 litres of our (thankfully!) cheaper-than-normal diesel which we’d managed to purchase whilst seeking out the elusive Aire, driving up and down the riverside in an attempt to find said car park entrance! This did not bode well for Team Sebo and, after a couple of hours waiting in said bus park, an executive decision was made to head for another free car park, some 5km outside of the city for the night, since we firmly object to paying €30/night in a Municipal Campsite (which is still 5km from the city centre!!)  with the firm intention of clearing outta town first thing the next morning. By this stage, Team Sebo, it would appear, is “all citied-out” and has decided to “head for the hills”, the “hills”, in this case, being The Pyrenees!

A quick look at the map revealed the town of Huesca as being a suitable overnighter enroute to the Pyrenees – and it proved to be so although, it has to be said, it has nothing else to offer other than a free car park and a Doggy Park – Harley was delighted to find not only a dedicated Doggy Park (although he was the only doggy in there when we availed of it!) but also a Doggy Training Park – with all kinds of “doggy assault course” apparatus! He was beside himself – with fear, rather than excitement, unfortunately, as he ran up the doggy see-saw only to find it tilted and he was thrown, somewhat unceremoniously, downhill at great speed! We had absolutely no chance of persuading him to run through the tunnel or, indeed, jump through a tyre or even over a hurdle after that!  I have the videos of his feeble attempts but, unfortunately, for some unknown reason, I cannot upload them to for all to see (“Thank God”, says Harley, “save my embarrassment!!”)  I fear the trauma of it all may stay with him for some time to come!

Anyhow, moving swiftly on……. the forecasted snow fell as rain and we hit the road for the hills – a new, free Aire in a small town, La Pobla De Segur, beckoned. It promised free water and, unusually, free electricity! Unbelievable, I know! In fairness, it’s “free” for one hour – to charge batteries etc BUT, since we were the only ones there for a while, it was merely a matter of resetting the switch every hour until 8pm and then, miraculously, it stayed connected all night! Happy Days! The drive up was, quite frankly, stupendous! Awesome scenery with the mountains, reservoirs, small villages clinging to mountainsides, tunnels AND a cute little railway line WITH a two carriage train wending its way up from Lleida (and which we raced!) all added to the excitement!

La Pobla De Segur turned-out to be one of our “amazing” places! We’d had a discussion earlier in the week regarding “is there anywhere you’ve felt at home yet?” and the answer was a collective “No!” -until we arrived here! THIS is a place we could call home! In the mountains, with several small ski resorts within a 50km radius and an endless amount of walking trails on our doorstep…..what’s not to like??? And just when you think things can’t get any better, there’s a bar serving Murphy’s Irish Red!!! Not an Irish Bar – since it’s called Palermo’s!!! Needless to say, it’s now on our list of “possibilities”!

We took a walk along the river to the reservoir and on to the next village on Sunday afternoon – a most pleasant walk revealing more “unspoilt” Spain. We were in heaven! 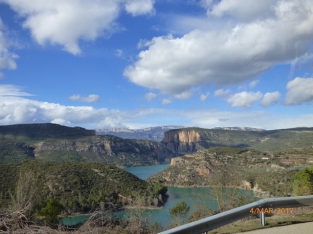 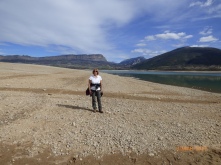 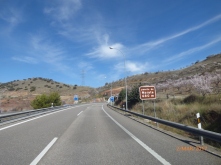 Somewhat reluctantly, we dragged ourselves away from La Pobla De Segur and headed back to our old friend  (and source of uber-cheap diesel,gin and Pastis!) Andorra. The drive was, as it always is in the mountains, amazing! Andorra is not, it has to be said, renowned for being “motorhome friendly” BUT, in it’s defence, it would appear that they are making some kind of attempt to rectify this situation, albeit at a cost! A trip to the Tourist Info yielded a map, with a series of “motorhome” stops….. some ready to use and some not BUT, since there was one ready to use in La Massana – a town we know well, since we spent 5 days there on Foxy in the summer of 2014- we headed for that one. Unfortunately, the map gave neither an address nor GPS co-ordinates and, after several fruitless attempts to find said Aire, we resorted to La Massana’s Tourist Office for directions! The dude behind the counter gave said directions, with the rider that, following a huge dump of snow recently, he wasn’t sure it was open since the local council had dumped the snow on that exact spot! Hmmmmm…..we’ll take a chance! As it turned out, the Aire was OK for parking but the water was turned off and, at €12/24 hours, we felt it was a bit steep BUT, since Angelo’s restaurant in the town offered the only cheese-free pizza this side of Ballygowan (we know this from the aforementioned previous visit!) and Karen was desperate for said cheese-free pizza, it seemed worth the expenditure for one night! Yes, the pizza lived-up to expectations and, with full tums, we slept through the night!

Unfortunately, we awoke the next morning to sleet/rain and, despite our efforts to find the promised Aire in Arinsal, we resorted to parking up temporarily on the ski lift car park and walking a very short distance up the Como Pedrosa trail before giving up and driving on. The Aire at Canillo proved equally difficult to locate and when we did, finally, find it, we discovered that the steep incline at the entrance was just too much for Sebo’s overhang and, rather than risk “grounding-out”, we carried on to El Pas De La Casa at the Frontier. By this stage, the weather was worsening and the only car park available wanted €20/24 hours, despite their services being unavailable due to it being “winter”. Seriously??? No matter, we topped-off Sebo’s diesel tank, Karen’s gin tank and Roy’s Pastis tank and headed back over the border into France – and the free Aire kindly provided by les Francais at L’Hospitalet Pres De L’Andorre! (whose services WERE still working, despite it being Winter!!). Andorra, much as we love you, you still have a lot to learn when it comes to motorhoming! 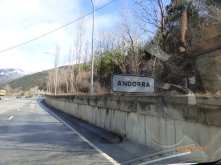 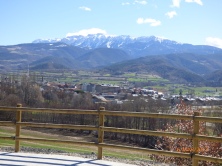 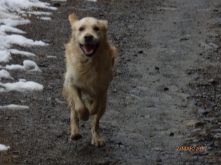 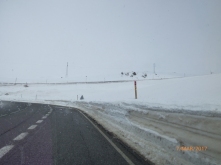 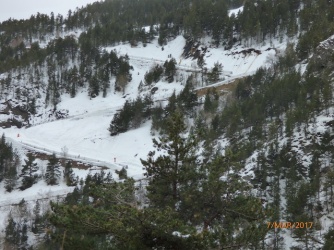