Monday morning arrived bearing sunshine after the rain! Yippee! Normally, we would be rejoicing in the fact that our solar panel was topping-up our batteries nicely, thus removing the requirement to pay for an electricity supply BUT, the damned fridge is playing up again! Grrrrr. With this is mind, and curious to know if it is, actually, just a gas problem, we decided to head for a campsite, hook up to the mains and see what happens. We’re aiming to be in Lisbon by the weekend so heading north is essential and, with that in mind, a quick look at our ACSI Camping Card App directed us to one of the few campsites open all year round – Camping Zambujeira . The short drive up took us through the Costa Vincentina National Park – a lush environment where building restrictions are, thankfully, uber-restrictive and the few towns and villages we passed through are utterly unspoilt by “modern” development.

Arriving at the campsite, we were given a fab welcome by the receptionist (who spoke excellent English!), told to choose whichever free pitch we wanted, whilst warning us that they had workmen in putting in a new jacuzzi so there might be a bit of noise in that area during the day so we might not want to park too close to them. Good of her to be so honest but, quite frankly, the pitches up close and personal to the new jacuzzi were the only ones in the sun which Sebo could comfortably fit into. We took the chance, thinking that, actually, it wouldn’t be a bad idea to be woken up by workmen at 8am ‘cos, basically, we have become soooo lazy lately and, since we had washing and other stuff to do, it would be good to get up early and get it done! Sounds good, yeah? Would you believe said workmen didn’t turn up on Tuesday morning so we still didn’t get up til almost 10am??!!

Anyhow, I digress….. on arrival, we plugged Sebo into the mains, stuck a thermometer into the fridge and took ourselves off to explore the small town of Zambujeira Do Mar. This is no town with a long history, it’s foundations being early 20th Century, when folk discovered that the beach here was a pretty good place to safely bathe in The Atlantic from, it being sheltered on three sides by huge cliffs.

The coastline here is absolutely stunning – unfortunately, some of the photos we took suffered from over-exposure due to the camera settings being inadvertently altered so you’ll just have to take our word for it!

Zambujeira is a pretty village but, unfortunately, work started on a huge development of apartments and villas on the outskirts back in 2010 – the infrastructure is all in but, at this moment in time, it’s just a huge car park – presumably, sales from the plans haven’t materialised OR the developer went to the wall. Either way, we actually hope it never happens for fear of spoiling the place!

We opted to spend two nights at the campsite – the fridge cooled nicely on the mains (so now we’re even more puzzled!!) and we got a wash done and line-dried and plenty of walking done in the sunshine so we’re happy bunnies! Total cost, including electricity, decent free WiFi, copious hot water and spotlessly clean surroundings? €26.62 for the two nights. Best value campsite yet!

Wednesday morning saw us heading further north to Vila Nova De Milfontes, a popular holiday resort with fab sandy beaches. Unfortunately, on arrival at our predicted sleepy spot, we found “No Overnight Parking” signs. Whether or not these are policed at this time of year we have yet to find out but, since it was only lunchtime, we decided to have lunch, take a quick stroll on the beach then blow town and head further north to Porto Covo where there’s a free Aire with services.

Having speculated on the drive up as to whether there would be many folk on the Aire which, allegedly, had room for 20, we were pretty gobsmacked on arrival – the place was jammed with at least 40 vans parked-up! Righto, so we have no Plan B here – luckily, there were a few car parking bays around the Aire so we just pulled into one of those, sideways on, and hoped for the best! As did the German van which followed us into town!

Porto Covo, it has to be said, is one of the less pretentious resorts along this coastline – it takes “cute” to the extreme with it’s pretty, whitewashed single storey houses perched just above the low cliffs and secluded sandy beaches. We took our “daily constitutional” on arrival and laughed when we saw the elderly male members of the community standing around watching (with great interest) the fellas laying cobblestones on the cliff road – were they marvelling at the new fangled contraption they were using to flatten the cobbles (“that’s not how we did it in our day”) or had they been campaigning for years to get the job done? Had our Portuguese been anything to write home about, we might have asked them….but it isn’t, so we didn’t! 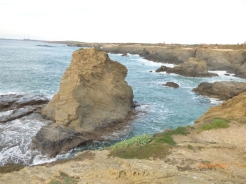 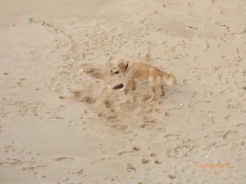 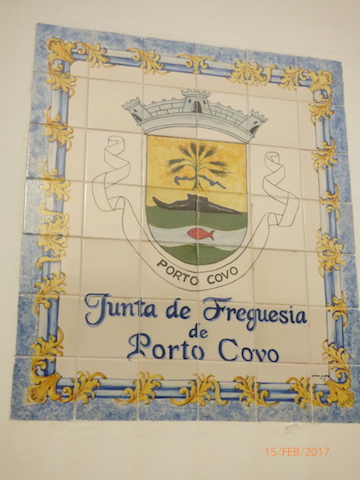 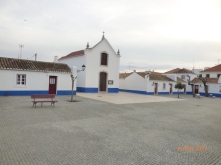 This morning, we were rudely awakened by a huge truck rattling by and some joker revving his engine in second gear as he drove past us at the ungodly hour of 7.30am. Subsequent attempts to get back over to sleep failed miserably so we got up pretty early by our standards, took luxuriously long showers, filled-up our water tank and dumped our waste at the Aire before hitting the road north once again.

Setúbal was our destination for today – or, rather, a nature reserve 5km from the city centre, which offered free overnight parking in a quiet location in the wetlands of the Sado Estuary. After rattling up the pretty shabby surface of the IC1 , pretty though the surroundings were, we were relieved to park up and discover we still had all our glassware, crockery and fillings intact! By this stage, our Met sensor was showing a temperature of 29C and we were only too glad to park up and get our chairs out! A quick leg stretch of a stroll for all three members of Team Sebo ensued, after which we all threw ourselves at the mercy of the sun to top-up our Vit D levels – well, all except for Harley, who took to the shade of Sebo’s bike rack for a few hours!

We’re now just 50km from Lisbon, where we intend to spend the weekend. We’ve sussed a cheap parking spot on the southside of the river, from where we can get a passenger ferry directly to the Old Town so here’s hoping it lives up to expectations!

Funny thing happened this evening as dinner was being cooked – we suddenly heard shouts of “Hello” at the door – further investigation revealed it to be a security guard, merely introducing himself and telling us that he’d be wandering around with a torch from time to time so not to worry! Cool or what? We now feel even safer than we did before!

As an aside, Monday marked our “100th Day in Mainland Europe” (we missed the 100th Day On The Road due to sheer ineptitude!) and we will, at some stage, be posting a Special 100 Day Anniversary thing, detailing our highs and lows and, if I get my act together, an account of our expenditure so far (don’t hold your breath for this though, ‘cos it involves a whole load of calculations and a spreadsheet which has yet to be completed – get my drift?). Important thing is ……we’re still speaking, haven’t wanted to kill each other as yet (though, I speak for myself on that score!) and we’re still solvent, so it can’t be bad, can it?

All in all, and I do speak for all three of us on this – we are having an absolute ball and have no doubts at all that we did the right thing by jacking in our jobs and hitting the road to freedom when we did!