We were rudely awoken at 6.12am this morning by the dulcet tones of market traders setting-up their stalls – half expecting a knock on the door asking us to move, slumber was somewhat restless. The knock never came and when we DID get up and open our blinds, we saw the market was in full flow on the adjoining car park, not ours! We were somewhat startled to see the transformation from a vast car parking area containing just a dozen motorhomes and two weird characters- and their dog- apparently living in their Audi car (!).  to now a sea of vehicles and several hundred market stalls! Naturally, since we haven’t managed to make it to a proper market since we left home, we HAD to venture forth to experience it! We instantly regretted buying fruit and veg in Lidl two days ago! Unlike French markets which have a reputation for being a tad pricey, this market was dirt cheap! 50c for a kilo of oranges? Seriously? We are, however, still a tad dubious as to the authenticity of the Nike trainers and Prada handbags on offer! Nonetheless, we DID purchase a shed load of fresh olives for a ridiculously low price – plus yer man threw in a mixture of olives, peppers, lemons etc for free! Delighted, so we were! That, together with some huge apples, tomatoes and a football-sized cauliflower for very little money, quite made our day – or so we thought-until we started driving up to Las Alpajurras – the spectacular drive surpassed the market by a long chalk!

As we started the ascent up into the Sierra Nevada range, the vision of lots of small hillside villages suddenly became a reality! Whitewashed cube-like houses clinging to the hillsides, surrounded by vineyards, orchards and olive groves made us realise that THIS is the “real” Spain. Totally unspoilt! 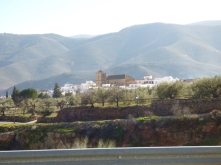 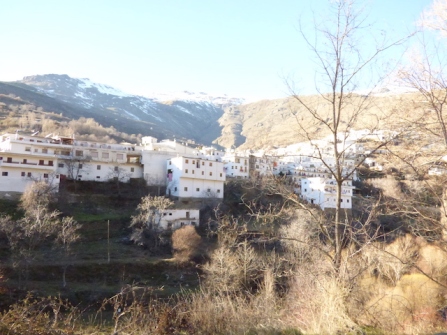 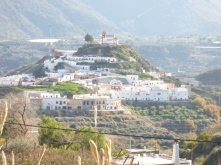 Having not been on a campsite since Wednesday morning, we were now in need of freshwater and even more in desperate need of emptying our waste tanks- thankfully we had the foresight to invest in a spare toilet cassette before we left home! A quick look at our All The Aires book identified a free Aire just off our route which would enable us to dump the waste and fill up with water at Canjayar so we set the CoPilot to take us there. What a beaut of a find! Great spot, just off the uber quiet “main road” with space for seven “autocaravanes”, full service area and within a short walk of a very pretty village – fair play to whoever put this in place! We didn’t, at this juncture, need overnight parking but we made full use of the facilities – filled our water tank, had lunch, both had luxurious showers then refilled the tank AND were gifted by the sight of a traditional Alpajurran shepherd “walking” his huge herd of goats! Three dogs up front leading the way, goats following on behind and him meandering alongside as cool as you like – I want his job! 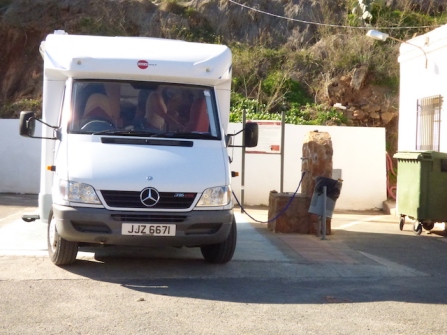 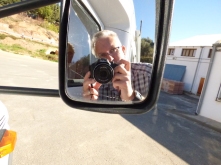 We drove on up into the Sierra Nevada National Park – fearing the worst with the thought of the winding roads but were pleasantly surprised! Yes, the road is winding BUT it’s also smooth blacktop so no need to worry about avoiding the potholes whilst negotiating the bends! We really have to commend the Spanish government on their infrastructure – great roads on which to drive! UK/Irish Governments could learn a lot from them!

Our sleepy spot tonight is a car park in Trevelez – the second highest village in Spain and famous for it’s Jamon – air-dried ham-on account of it’s mountain air. Jamon serrano, as it’s commonly known, is a huge thing here in Spain and, whilst not the cheapest food item, appears to be immensely popular in the supermarkets, particularly just before Christmas. Judging by the number of Jamon-secadours up here, they must be supplying it to a huge market! Full hams hanging everywhere! We’re seriously considering buying one and hanging it in Sebo’s garage – reckon it would last us a year!

Since it’s our 3-month Wedding Anniversary today, we decided to treat ourselves to dinner out and, having reccied the local eateries and checked Tripadvisor reviews, we headed out for dinner, with the outside temperature showing a mere 3.5C – a bit of a change since yesterday evening’s 15C in Almeria! Brrrrr. Seems Sebo’s heating system is about to be switched back on! We walked into Casa Julio’s to find it empty – lights on in the bar but no lights on in the dining room! We hung around for a few minutes but no sign of anyone. Just as we were about to leave, a woman wearing an apron appeared and, using Google Translate, since our Spanish is still pretty much non-existent (shame on us!), we managed to ask her if she was open for food. She was! She instantly switched on the lights and ushered us in. The food was delicious! Naturally, we had to order the local Jamon as a starter- seemed only right-then I had lamb chops, Roy went for the rabbit, both served with the regional speciality “patates poble”- potatoes sauteed with onion, garlic and red peppers- with a litre jug of the local “costa” vino and two coffees, the bill came to €43.90- couldn’t fault it! Happy Anniversary To Us!

A brisk walk back up the hill to our sleepy spot and we’re now ensconced in Sebo with a Lidl brick of Vino Tinto with the heating turned up full – it’s now 2.6C outside but we’re all warm and cosy and happy as Larry inside. Tomorrow we’re planning to do a 12km hike up the hillside to the snow-capped mountain tops – we may dig out our thermals and the flask, methinks!