Our excitement at arriving in Mayrhofen was somewhat tempered by the disappointment of discovering that our hoped-for (cheapish) sleepy spot at the Parascending School was a) already full and b) reserved for clients of said establishment at this time of year! Fair enough! Not wanting to pay megabucks for a pitch at the town’s only campsite, and mindful of the fact that we were still in Tirol and, thus, not allowed to overnight on just any old car park, we parked-up on the town car park to review our options. We could, actually, have stuck €10 in the machine here and spent the night since it offered such a facility and certainly had no signs to indicate that motorhomes weren’t allowed but, to be honest, it was too close to the main road and we thought it might be a tad too noisy. Anyhow, we stuck a couple of euro into the meter and went off for a mooch around town. A pretty, high-end resort, more popular in winter due to it’s awesome skiing, it’s full of very nice hotels, bars, restaurants and outdoor gear shops. Unlike so many of the purpose built ski resorts you find in other countries, it has managed to retain it’s village charm, with not a single high rise block of cheapie apartments to be seen. I imagine the skiing here would be fabulous – part of the Zillertal Arena, with a huge amount of lifts and runs for all levels and famous for having the steepest downhill piste in Austria (The Harikiri, with a 78% gradient – I actually shiver at the thought!), the whole area is a downhill skier’s dream! 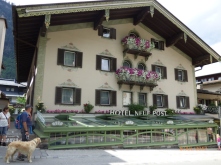 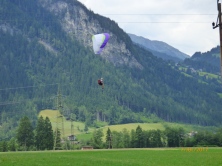 But, since it’s summer, and there’s only a few pockets of snow left on the higher slopes, we were more intent on discovering the area on foot. We were actually spoilt for choice! A look at the walking trail map revealed enough walking opportunities to keep even the most fervent walker in their boots for weeks, if not months! We, on the other hand, only have a couple of days here and, with the weather forecast being somewhat “mixed” and, at this stage, not knowing where exactly we could park up a couple of  nights, we picked a route for Saturday which was only around 12km and kept us pretty low and sheltered.

We headed back to Sebo and took a drive around to try suss a quieter sleepy spot – as luck would have it, we happened upon a car park just across the river from the town, mainly used for the Via Ferrata routes, €3/day until 1800hrs, then, apparently, free until 0800hrs. There was, we admit, a “no caravans and no tents” sign and it also warned that “Camping was Verboten” but, since it didn’t actually say “no motorhomes” and, technically, we were “parking” rather than “camping” i.e we didn’t get chairs, table, BBQ etc out, we hoped we’d get away with it! Luckily, we did -we stuck a €3 daily ticket on first thing Saturday and Sunday morning and no-one bothered us. Phew!

On Saturday morning, we were up bright and early – mainly because of the sound of the River Ziller pounding it’s way downstream just a few metres from where we’d lain our heads but, heyho, silence is golden and not, in our experience, always available! We had our morning cuppa watching the cars pulling up alongside us and families with young children gearing up in their harnesses and helmets ready to tackle the Via Ferrata. What a great way to spend quality time with the kids! No mobile phones or other gadgets – just lots of fresh air and exercise! Way to go! We, on the other hand, opted to forego the opportunity – not sure how Harley would have looked in a harness and helmet – and took ourselves off to do the walk we’d planned the day before. We even had a map! So, quite how we managed to turn off the route too early and end up halfway up Ahorn mountain is anyone’s guess but we did! Not that it really mattered – we had an awesome walk up to a rather nicely located Gasthof, where we indulged ourselves in a much needed pint of Austria’s finest lager, whilst admiring the views over the valley, before parking ourselves on the first available bench on our descent route to tuck into the rather yummy Strudel we’d bought at a bakery earlier. 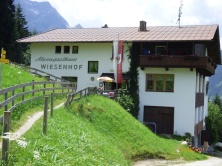 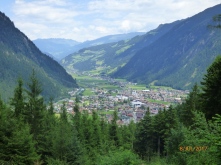 It was only as we walked back down that I realised where we’d gone wrong earlier – we’d followed the course of the waterfall running through Mayrhofen rather than the actual river! Doh! Mental note to look more closely at the map next time! We headed back to Sebo via Mayrhofen’s main street and had a pre-dinner drink at a bar we’d stopped at on Friday – the waitress made a fuss of Harley, brought him a dish of water and said “see you tomorrow” as she patted his head on our way out! A legend in his own lifetime!

We’d decided that, since we’d knocked the dinner out in Mittenwald idea on the head last weekend, we’d definitely treat ourselves this weekend so we donned our gladrags and headed up the town at pretty much the same time as a thunderstorm headed our way! Two drowned rats sat down at a table at the Hotel Neue Post’s restaurant that night! Perusing the menu, we opted for the house Tyrolean specialities – mainly, it has to be said, because they were more affordable than the other fare on offer – but we weren’t at all disappointed when our chosen dishes arrived! My Tiroler Gröstl was tasty, warming and very filling! Roy’s “surprise” dish (“surprise” since even the English translation gave little away, other than it was a Tyrolean Farmer’s dish!) was HUGE! Ham, lamb,sausage, herby dumpling, sauerkraut, potato, veg, gravy! His initial trepidation soon waned when the tucker arrived and he tucked-in like he’d never been fed! 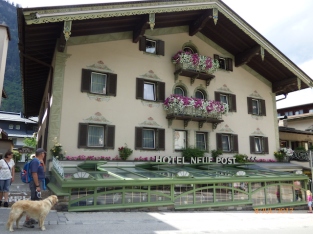 On Sunday, we actually managed to find the trail we’d intended walking the day before…it took us up to the Glocke and across the Tux Stream Gorge into the pretty village of Finkenberg. We had a fab walk – marred only by the loss of Roy’s favourite hat (an old friend, which he’d bought in Nepal a few years ago – a minute’s silence, please!) so, to drown our sorrows, we headed back to our “local” – this time, the waitress had Harley’s water dish down for him before we’d even sat down and had our beers pretty much poured before we’d even ordered ’em! THAT’S service! 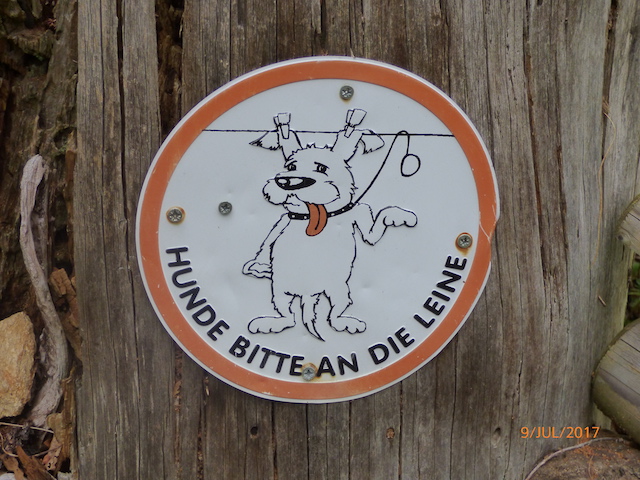 As we walked back to Sebo, we pondered on whether we should stay put on the same car park for yet another night or should we move on – not wanting to outstay our welcome, we opted to drive up to the Hintertux Glacier where, apparently, the car park at the cable car station “tolerates” overnight motorhome parking and, even better, is free and very quiet. Unfortunately for us, just as we landed, the mother of all thunderstorms kicked-off, along with torrential rain so we couldn’t even get out to admire the view until it stopped, by which time darkness was almost upon us! We got a fleeting glimpse of the glacier itself and the stunning view of the valley below before darkness fell. Thankfully, we managed to get a good sleep and, when we awoke and looked outside, we were amazed to see the huge car park half full with cars and a rake of folk heading off to the cable car in their ski gear. Hintertux is the only Austrian resort offering 365 day skiing! I have to confess to a sudden regret at not bringing my ski boots along! Not sure if our travel insurance covers winter sports though so probably just as well I didn’t! 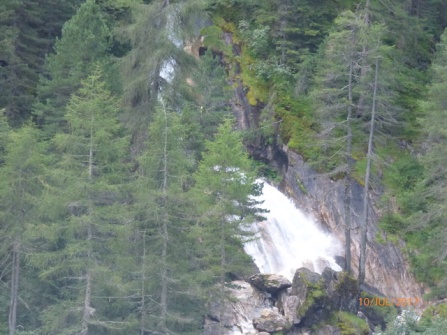 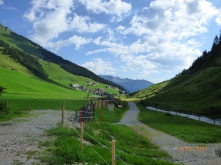 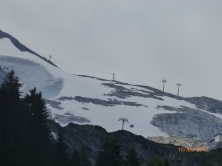 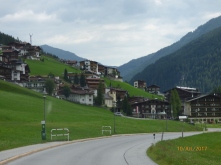 Winter sports apart, Hintertux offers some fab walking opportunities – unfortunately, we’d already decided to head East towards Salzburg by the weekend, taking in the Gerlos and Grossglockner Alpine Drives so, for now, we’ll put them on hold, but this is certainly a place to be visited again in the future ( the list is growing by the day!)

Monday morning, having bade “aufwiedersehen” to Hintertux, we retraced our steps through the Zillertal as far as Zell am Ziller and then headed up to Gerlos, a pretty much purpose-built ski resort from what we could see, yet still retaining it’s Tyrolean character, apart from the “English Pub”…..must be popular with British skiers! 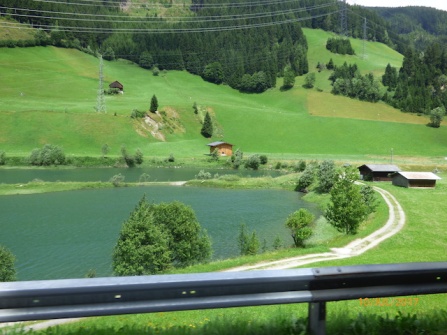 The Gerlos Pass is one of the many “private” roads in Austria which require a toll to be paid – in this case €9 – and, whilst we don’t normally “do” tolls, we relented in this case as it’s reputed to be an awesome drive AND gives great views of Europe’s longest waterfall, The Krimml Falls. So, hoping we wouldn’t be disappointed, we handed over the dosh, and off we went – climbing higher and higher until we reached a small car park, brimmed with motorcyclists and folk having their picnic lunches whilst admiring the view. Not to be outdone, we squeezed in, hopped out and had our breath taken away by the awesome view! Even from a distance, the power of the waterfall could be clearly seen as it poured down the mountain in a huge torrent! Needless to say, we got our money’s worth both with the drive itself (which was awesome!) and the stunning views it gave us! 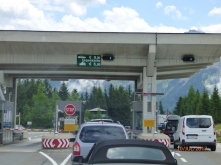 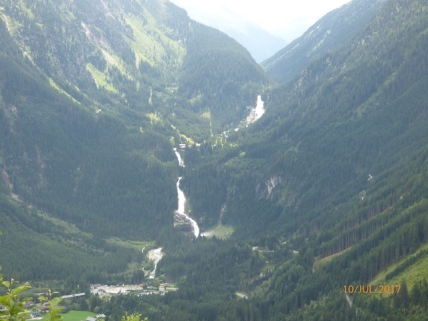 Several more viewing points were positioned at various stages along the Gerlos Pass, each affording onlookers fab views of the waterfalls and the surrounding mountains, along with information boards regarding The Grossglockner Alpine Road – this is the next thing to be ticked-off our Bucket Lists, in a few days time but, for now, we are down to our last electric toothbrush and, hence, need to find an affordable pitch with an electric hook-up. Lucky for us, there’s exactly what we need at Gasthof Friedburg in Neukirchen in the Wildkogel region, where a rather enterprising family have put in a motorhome/caravan stellplatz, with electricity, water and drainage available for less than the cost of a normal car park! It gets rave reviews on all our Apps so we’re optimistic……will fill you in when we’ve tried it!

3 thoughts on “Weekend Meanders in Mayrhofen, An Awesome View Of The Hintertux Glacier And Krimml Waterfalls And A Two Night Stay In The Wildkogel.”